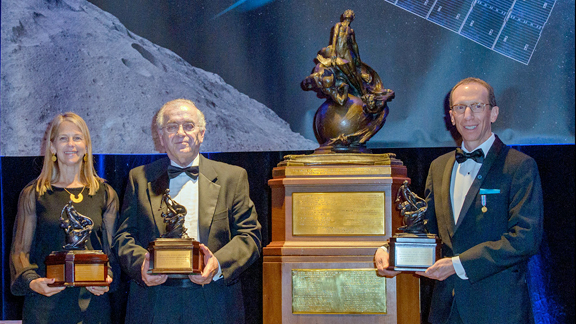 Photo is courtesy of NASA/Joel Kowsky.

The award, presented annually, was given to Dawn Mission "In recognition of the extraordinary achievements of orbiting and exploring protoplanet Vesta and dwarf planet Ceres, and advancing the nation's technological capabilities in pioneering new frontiers in space travel."

The 8 foot tall (2.4 meter) trophy resides at the Smithsonian National Air and Space Museum in Washington and is engraved with the names of recipients. Dawn competed with a field of nine finalists to win this year's award. Dawn's mission is managed by NASA's Jet Propulsion Laboratory, Pasadena, California, for NASA's Science Mission Directorate in Washington. Previous Collier Trophy recipients involving JPL missions include the teams from NASA's Mars Science Laboratory (2012) and Voyager (1980).

NASA Deputy Administrator, Dava Newman, said, "This mission isn't only for scientists. It's for all of us who want to discover the nature of uncharted worlds and share that discovery with all who gaze up at the night sky in wonderment."

JPL is a division of the California Institute of Technology in Pasadena, California.

For a complete list of mission participants, visit: http://dawn.jpl.nasa.gov/mission

More information about Dawn is available at the following sites: