[SatNews] Iridium Communications Inc. (Nasdaq:IRDM) has announced the successful upgrade of its System Control Segment (SCS) and completion of its Launch and Early Operations (LEOP) control center for Iridium NEXT, the largest new commercial satellite constellation in the world. 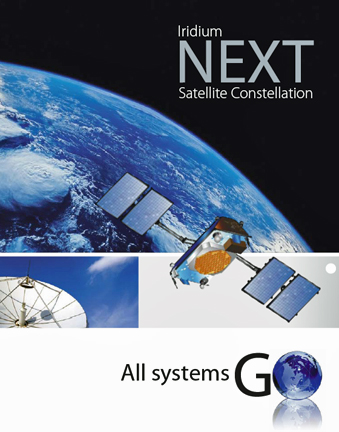 Iridium NEXT Mission Team partner L-3 Telemetry-West (L-3 TW) played a key role in the upgrade project with their InControl™ software suite. InControl is providing the core satellite command and control functions allowing Iridium NEXT satellites to be efficiently controlled through automation, an extensive application programming interface (API), and a user-centric fleet management design. The overall development of the SCS is performed by The Boeing Company, which is a long-time Iridium operations partner. Boeing will continue operating the constellation through its transition to Iridium NEXT and beyond as the company's operations and maintenance provider.

"Our team has been working side by side with Iridium and Boeing to develop the technical capabilities to support Iridium NEXT," said Jim Presnell Vice President of Engineering at L-3 TW. "This is a significant accomplishment on the road to launch Iridium NEXT, and we're proud to be a part of the continued success."

The completion of the build out for the LEOP control center marks another significant milestone toward the launch of Iridium NEXT. In the LEOP facility, the Iridium NEXT satellites will be managed after separation from the launch vehicle, tested to ensure on-orbit functionality, and then maneuvered and monitored while they are transferred into the mission constellation. The new facility was strategically co-located with the Iridium Mission Control Center to create a cohesive site for operations, enabling greater efficiencies and providing synergy across the teams for a seamless transition to the core Iridium mission.

"With the SCS upgrade and completion of the LEOP control facility, we've passed two huge launch milestones and are now operationally ready for the launch of Iridium NEXT," said Scott Smith, chief operating officer, Iridium Communications Inc. "L-3 TW and Boeing have done an outstanding job making this possible. Together, we've built the infrastructure that will be operating the satellites from launch through the entire Iridium NEXT mission."

The Iridium NEXT satellite network will consist of 66 in-orbit satellites and a number of in-orbit spares. The constellation is expected to begin launching in 2015 and will offer greater bandwidth and data speeds when fully operational in 2017.

For more information on Iridium NEXT, go to http://www.iridium.com/.