[SatNews] An unseasonably early nor’easter dropped as much as 32 inches (81 centimeters) of snow on some parts of the northeastern United States in late October 2011. 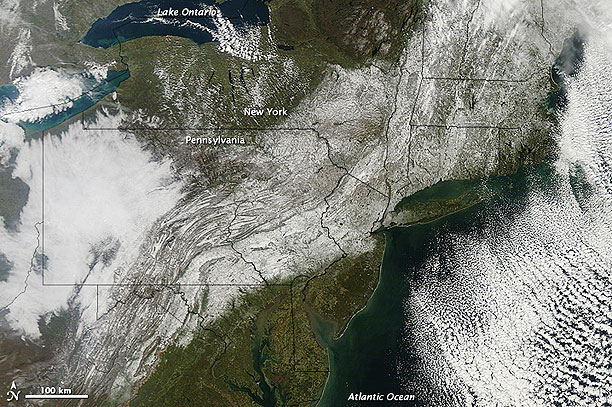 The storm broke snowfall-total records in cities throughout the U.S. Northeast, Capital Weather Gang reported. The nor’easter was also surprisingly intense, causing wind gusts along the Massachusetts coastline of 69 miles (111 kilometers) per hour. More than three million homes and businesses lacked electricity in the wake of the storm, according to news reports. Capital Weather Gang reported that this storm caused a record loss of electricity in Connecticut—worse than the power loss caused by Hurricane Irene. As residents headed back to work on October 31, closed or icy roads complicated commutes in multiple states. Fortunately, rising temperatures were expected to help melt the snow.