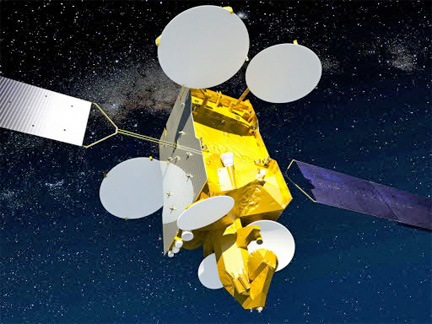 Artistic rendition of the SES-6 satellite.
Image courtesy of EADS Astrium.
[SatNews] SES S.A. (NYSE Euronext Paris and Luxembourg Stock Exchange: SESG) has been informed by Arianespace that the launch of the ASTRA 5B satellite will be delayed to January of 2014—this is flight VA216.

The reason is the non-availability of ASTRA 5B’s co-passenger satellite for launch on board an Ariane 5 booster from the European spaceport in Kourou, French Guyana—the launch had been scheduled to occur on December 6, 2013.

The ASTRA 5B spacecraft, which arrived in Kourou on November 6, 2013, in order to be readied for launch, will now be placed into safe storage until the launch preparations can resume.

ASTRA 5B was built by EADS Astrium in Toulouse, France, based on the highly reliable Eurostar E3000 platform. The satellite will be located at the orbital position of 31.5 degrees East and is equipped with 40 Ku-band transponders (36 MHz equivalent) as well as 6 Ka-band transponders. ASTRA 5B will extend SES’ transponder capacity and geographical reach over Eastern European and neighbouring markets for DTH, direct-to-cable and contribution feeds to digital terrestrial television networks. The spacecraft also carries a hosted L-band payload for the European Commission’s European Geostationary Navigation Overlay Service (EGNOS).

The recalcitrant second passenger is the Amazonas 4A satellite, which apparently now requires some additional verifications.

Additionally, Comcast Wholesale has renewed and expanded key agreements with SES for nearly 650MHz of C-band capacity to deliver a broad range of content management and delivery solutions to media companies across North America.

As part of the multi-year deal, Comcast Wholesale continues to use 16 transponders aboard the AMC-18 satellite and one transponder on the AMC-1 spacecraft and has contracted one additional transponder on this spacecraft. The capacity enables Comcast to provide cable programmers, multiple system operators and independent cable operators access to linear and on-demand content distribution solutions, including Comcast's HITS (Headend in the Sky) platform. The Comcast Media Center on-demand programming distribution will be transitioned from AMC-1 to the new SES-3 satellite in 2014.

SES-1 at 101 degrees West, AMC-1 at 103 degrees West and AMC-18 at 105 degrees West make up SES's expanding cable video distribution neighborhood at their locations in the center of the arc over North America. AMC-18 has played an integral role supporting the HITS platform since 2007, when Comcast Wholesale moved its innovative platform from Ku-band to C-band.