NASA's STEREO...Solar Streamers Too Hot To Handle, No Dentist For These Cavities 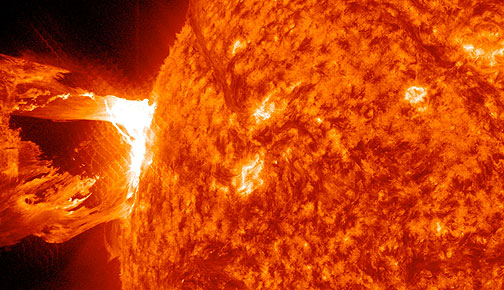 Scientists want to understand what causes giant explosions in the sun's atmosphere, the corona, such as this one. The eruptions are called coronal mass ejections or CMEs and they can travel toward Earth to disrupt human technologies in space. To better understand the forces at work, a team of researchers used NASA data to study a precursor of CMEs called coronal cavities. Credit: NASA/Solar Dynamics Observatory (SDO)
[SatNews] “...describe a cavity in the shape of a croissant, with a giant inner tube of looping magnetic fields—think something like a slinky—helping to define its shape.”

STEREO (Solar TErrestrial RElations Observatory) is the third mission in NASA's Solar Terrestrial Probes program (STP). The mission, launched in October 2006, has provided a unique and revolutionary view of the Sun-Earth System.

The two nearly identical observatories—one ahead of Earth in its orbit, the other trailing behind—have traced the flow of energy and matter from the Sun to Earth. STEREO has revealed the 3D structure of coronal mass ejections; violent eruptions of matter from the sun that can disrupt satellites and power grids, and help us understand why they happen. STEREO is a key addition to the fleet of space weather detection satellites by providing more accurate alerts for the arrival time of Earth-directed solar ejections with its unique side-viewing perspective.

The sun's atmosphere dances. Giant columns of solar material —made of gas so hot that many of the electrons have been scorched off the atoms, turning it into a form of magnetized matter we call plasma—leap off the sun's surface, jumping and twisting. Sometimes these prominences of solar material, shoot off, escaping completely into space, other times they fall back down under their own weight.

The prominences are sometimes also the inner structure of a larger formation, appearing from the side almost as the filament inside a large light bulb. The bright structure around and above that light bulb is called a streamer, and the inside "empty" area is called a coronal prominence cavity.

Such structures are but one of many that the roiling magnetic fields and million-degree plasma create in the sun's atmosphere, the corona, but they are an important one as they can be the starting point of what's called a coronal mass ejection, or CME. CMEs are billion-ton clouds of material from the sun’s atmosphere that erupt out into the solar system and can interfere with satellites and radio communications near Earth when they head our way.

"We don't really know what gets these CMEs going," says Terry Kucera, a solar scientist at NASA's Goddard Space Flight Center in Greenbelt, Maryland. "So we want to understand their structure before they even erupt, because then we might have a better clue about why it's erupting and perhaps even get some advance warning on when they will erupt."

Kucera and her colleagues have published a paper in the September 20, 2012, issue of The Astrophysical Journal on the temperatures of the coronal cavities. This is the third in a series of papers—the first discussed cavity geometry and the second its density—collating and analyzing as much data as possible from a cavity that appeared over the upper left horizon of the sun on August 9, 2007 (below).  By understanding these three aspects of the cavities, that is the shape, density and temperature, scientists can better understand the space weather that can disrupt technologies near Earth. 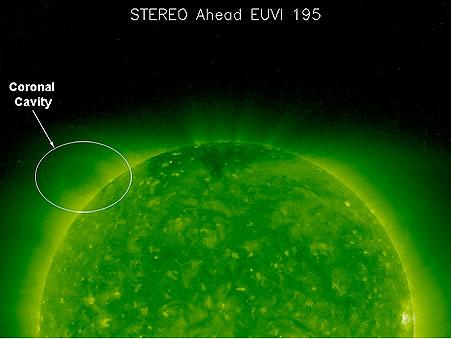 The faint oval hovering above the upper left limb of the sun in this picture is known as a coronal cavity. NASA’s Solar and Terrestrial Relations Observatory (STEREO) captured this image on August 9, 2007. A team of scientists extensively studied this particular cavity in order to understand more about the structure and magnetic fields in the sun's atmosphere. Credit: NASA/STEREO

The August 9 cavity lay at a fortuitous angle that maximized observations of the cavity itself, as opposed to the prominence at its base or the surrounding plasma. Together the papers describe a cavity in the shape of a croissant, with a giant inner tube of looping magnetic fields—think something like a slinky—helping to define its shape. The cavity appears to be 30 percent less dense than the streamer surrounding it, and the temperatures vary greatly throughout the cavity, but on average range from 1.4 million to 1.7 million Celsius (2.5 to 3 million Fahrenheit), increasing with height.

Trying to describe a cavity, a space that appears empty from our viewpoint, from 93 million miles away is naturally a tricky business. "Our first objective was to completely pin down the morphology," says Sarah Gibson, a solar scientist at the High Altitude Observatory at the National Center for Atmospheric Research (NCAR) in Boulder, Colo. who was an author on all three cavity papers. "When you see such a crisp clean shape like this, it’s not an accident. That shape is telling you something about the physics of the magnetic fields creating it, and understanding those magnetic fields can also help us understand what’s at the heart of CMEs."

They collected this information for the cavity’s entire trip across the face of the sun along with the sun’s rotation. Figuring out, for example, why the cavity was visible on the left side of the sun but couldn’t be seen as well on the right held important clues about the structure’s orientation, suggesting a tunnel shape that could be viewed head on from one perspective, but was misaligned for proper viewing from the other. The cavity itself looked like a tunnel in a crescent shape, not unlike a hollow croissant. Magnetic fields loop through the croissant in giant circles to support the shape, the way a slinky might look if it were narrower on the ends and tall in the middle – the entire thing draped in a sheath of thick plasma. The paper describing this three-dimensional morphology appeared in The Astrophysical Journal on December 1, 2010.

Next up, for the second paper, was the cavity’s density. Figuring out density and temperature was a trickier prospect since one’s point of view of the sun is inherently limited. Because the sun’s corona is partially transparent, it is difficult to tease out differences of density and temperature along one’s line of sight; all the radiation from a given line hits an instrument at the same time in a jumble, information from one area superimposed upon every other.

Using a variety of techniques to tease density out from temperature, the team was able to determine that the cavity was 30 percent less than that of the surrounding streamer. This means that there is, in fact, quite a bit of material in the cavity. It simply appears dim to our eyes when compared with the denser, brighter areas nearby. The paper on the cavity’s density appeared in The Astrophysical Journal on May 20, 2011.

"With the morphology and the density determined, we had found two of the main characteristics of the cavity, so next we focused on temperature," says Kucera. "And it turned out to be a much more complicated problem. We wanted to know if it was hotter or cooler than the surrounding material – the answer is that it is both."

Ultimately, what Kucera and her colleagues found was that the temperature of the cavity was not, on average, hotter or cooler than the surrounding plasma.

However, it was much more varied, with hotter and cooler areas that Kucera thinks link the much colder 10,000 degrees Celsius (17,000 F) prominence at the bottom to the million to two million degrees Celsius (1.8 million to 3.6 million degrees Fahrenheit) corona at the top. Other observations of cavities show that cavity features are constantly in motion creating a complicated flow pattern that the team would like to study further.

While these three science papers focused on just the one cavity from 2007, the scientists have already begun comparing this test case to other cavities and find that the characteristics are fairly consistent. More recent cavities can also be studied using the high-resolution images from NASA’s Solar Dynamics Observatory (SDO), which launched in 2010.

"Our point with all of these research projects into what might seem like side streets, is ultimately to figure out the physics of magnetic fields in the corona," says Gibson. "Sometimes these cavities can be stable for days and weeks, but then suddenly erupt into a CME. We want to understand how that happens. We’re accessing so much data, so it’s an exciting time – with all these observations, our understanding is coming together to form a consistent story."