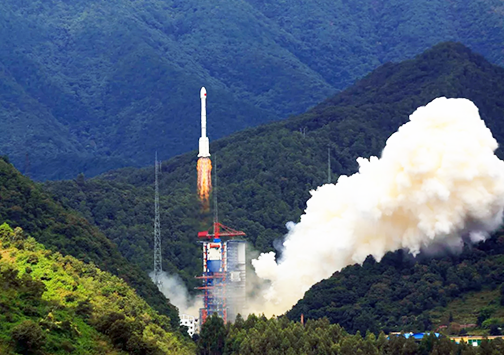 The launch of the Long March 3B rocket with the Beidou-3 M15 payload.

Photo is courtesy of the China Academy of Launch Vehicle Technology.

Andrew Jones at gbTimes' online infosite is reporting that China has successfully launched a pair of Beidou navigation and positioning satellites into MEO on Monday, making this event the country's 28th orbital launch of 2018.

A Long March 3B rocket with a Yuanzheng-1 upper stage lifted off from the Xichang Satellite Launch Centre in southwest China at 04:23 universal time (12:23 local, 00:23 Eastern).

The China Aerospace Science and Technology Corporation (CASC) confirmed the mission to be a success four hours later, following direct insertion of the Beidou-3 satellites into their intended medium Earth orbits (MEO).

The China Academy of Launch Vehicle Technology (CALT), which developed the Long March 3B rocket, reported that data logging and active tracking equipment was placed aboard for tests to determine to altitude and timing for future parachute landings for boosters.

The trial phase of parachute booster landings is expected in 2019. Expended rocket boosters frequently land in or near populated areas downrange of Xichang.

These satellites are the 39th and 40th launched as part of China's Beidou system, following the launch of the first in 2000.