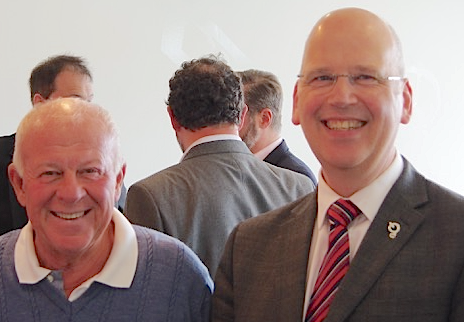 All smiles on signing day as investor Peter Hargreaves on the left, and Ian Jones, Goonhilly Earth Station Ltd CEO on the right
set their sights on the future.

Cash infusions in the space industry isn't just for billionaires such as Elon Musk, Jeff Bezos, Richard Branson and Greg Wyler as evidenced with a healthy second phase investment that came to Goonhilly Earth Station Ltd. in Cornwall, UK from Hargreaves Lansdown, the founder of a leading finance and investment services company.

This infusion is in addition to the company's recent £8.4 million contract win from the European Space Agency with the goal of becoming the first private operator in the global Deep Space communication network. GES’ plans also include working with Surrey Satellite Technology Ltd and ESA, and the company plans a privately funded mission to the Moon, providing communication relay and navigation services to other lunar missions.

Hargreaves' talents include spotting high growth investment opportunities, and this is an ideal addition to his investment portfolio. He stated that the team at Goonhilly have been delivering on an insightful vision which has already propelled them to the key position in this expanding market. He wanted to add his backing to ensure they can realize their bold plans to be the recognized leader in the field.

Since 2014 Goonhilly Earth Station has been owned by Goonhilly Earth Station Ltd. (GES), a privately held company founded by technology entrepreneur Ian Jones. Jones had spotted an opportunity to create a dynamic communications hub with diverse revenue streams, so he built the company. Since acquiring the facility from BT, GES has invested £5 million in comprehensively rejuvenating the site, whose heritage includes playing a pivotal role in many of the global communications industry’s technical firsts. As a result of this modernization, Goonhilly has seen a major resurgence and has driven many new-era space exploration and commercial communications projects forward for a wide diversity of customers.

Jones stated that they initially agreed to lease some of the antennas from BT in 2011 with an option to acquire the whole site if they could generate enough business. Within three years they had a profitable business and a first round investor on board enabling them to buy the site. From there, they’ve gone from strength to strength.

Until recently, in the company's 56 year history only governments or the largest corporations had the resources to invest in the space sector. Now it is becoming a popular choice for high net worth individuals who are attracted by the pace of innovation, brilliant minds involved and breath-taking excitement. 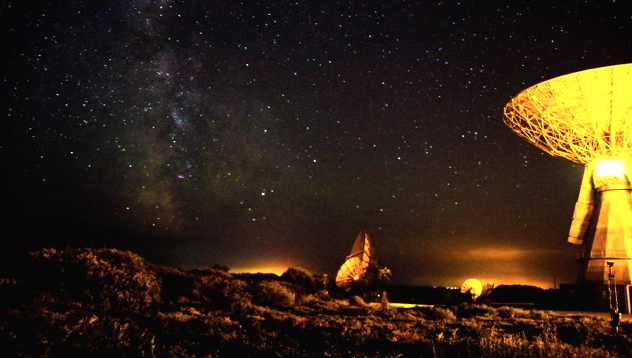 As part of its high-growth strategy, Goonhilly is an Enterprise Zone, supporting a technology cluster and hosting other companies. Cornwall has extensive fiber optic cables with transmissions that reach all parts of the world. The infrastructure at Goonhilly allows anyone based there to tap into this network to access highly reliable data and satellite services.

Goonhilly is also a key part of the UK’s ambitions to site Europe’s first Spaceport at Cornwall’s Newquay airport. If successful, Goonhilly would provide tracking and mission control services to a broad range of participants in the emerging Low Earth Orbit (LEO) satellite economy.

Jones said that Peter’s involvement is perfect timing as it allows them to realize their plans to grow parallel, but highly connected, revenue streams. They are breaking new ground in developing a private global deep space network at the same time as pushing the technology and service boundaries in other parts of the business.

He continued that the ‘new space’ entrepreneurs are all about changing the model of how the space industry works, shattering previously entrenched practices and replacing them with new models of high productivity, workforce energy and embracing technology. This leads to much better solutions for their customers. Peter’s strategic thinking coupled with his financial backing will help to propel Goonhilly to new heights.