The Florida Today infosite reports that landing on the three mile shuttle runway at Kennedy Space Center today was a USAF C-5 transport aircraft that was packing in NOAA's GOES-R satellite. 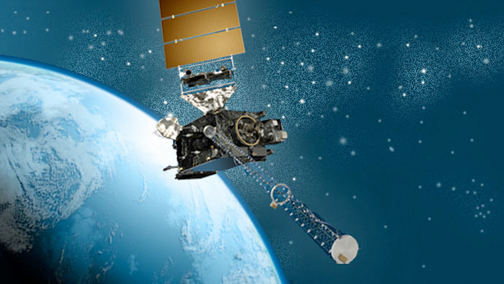 Artistic rendition of the GOES-R satellite.

Representing a giant leap forward in technology when compared to the satellite's predecessors, according to the agency, GOES-R is projected to improve all sorts of weather forecasting. This is the first of four satellites that will require an expenditure of some $11 billion to complete the project. Built by Lockheed Martin, GOES-R will attain a geostationary orbit some 22,300 miles above the equator.

The satellite built by Lockheed Martin will fly 22,300 miles over the equator in a fixed position relative to the ground, known as a geostationary orbit and, at liftoff, will weight approximately 6,200 pounds. Pre-launch processing has started at Lockheed Martin's Astrotech Space Operations facility in Titusville, Florida.