[SatNews] Approximately 60 percent of California is experiencing “exceptional drought,” the U.S. Drought Monitor’s most dire classification—the agency issued the same warning to Texas and the southeastern United States in 2012.

California’s last two winters have been among the driest since records began in 1879. Currently, there is no ground- or satellite-based global network monitoring soil moisture at a local level. Farmers, scientists and resource managers can place sensors in the ground, but these only provide spot measurements and are rare across some critical agricultural areas in Africa, Asia and Latin America. The European Space Agency’s Soil Moisture and Ocean Salinity mission measures soil moisture at a resolution of 31 miles (50 kilometers), but because soil moisture can vary on a much smaller scale, its data are most useful in broad forecasts.

Enter NASA’s Soil Moisture Active Passive (SMAP) satellite. The mission, scheduled to launch this winter, will collect the kind of local data agricultural and water managers worldwide need. SMAP uses two microwave instruments to monitor the top 2 inches (5 centimeters) of soil on Earth’s surface. Together, the instruments create soil moisture estimates with a resolution of about 6 miles (9 kilometers), mapping the entire globe every two or three days. Although this resolution cannot show how soil moisture might vary within a single field, it will give the most detailed maps yet made.

“Agricultural drought occurs when the demand for water for crop production exceeds available water supplies from precipitation, surface water and sustainable withdrawals from groundwater,” said Ecological Forecasting research scientist Forrest Melton at NASA Ames Research Center in Moffett Field, California. “Based on snowpack and precipitation data in California, by March we had a pretty good idea that by summer we’d be in a severe agricultural drought,” said Melton. “But irrigation in parts of India, the Middle East and other regions relies heavily on the pumping of groundwater during some or all of the year.” 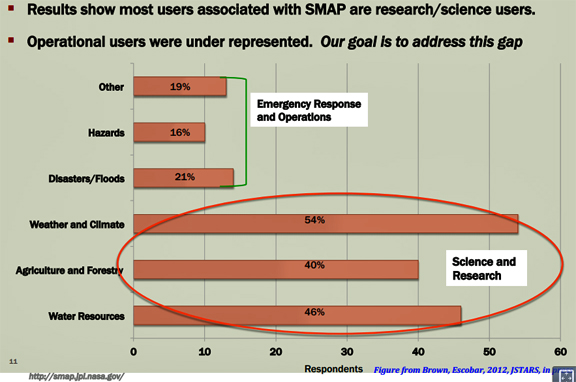 Underground water resources are hard to estimate, so farmers who rely on groundwater have fewer indicators of approaching shortfalls than those whose irrigation comes partially from rain or snowmelt. For these parts of the world where farmers have little data available to help them understand current conditions, SMAP's measurements could fill a significant void. Some farmers handle drought by changing irrigation patterns. Others delay planting or harvesting to give plants their best shot at success. Currently, schedule modifications are based mostly on growers’ observations and experience. SMAP’s data will provide an objective assessment of soil moisture to help with their management strategy.

“If farmers of rain-fed crops know soil moisture, they can schedule their planting to maximize crop yield,” said SMAP Water and Carbon Cycle Scientist Narendra Das at NASA’s Jet Propulsion Laboratory in Pasadena, California. “SMAP can assist in predicting how dramatic drought will be, and then its data can help farmers plan their recovery from drought.”

“Scientists see tremendous potential in SMAP,” said Melton. “It is not going to provide field-level information, but it will give very useful new regional observations of soil moisture conditions, which will be important for drought monitoring and a wide range of applications related to agriculture. Having the ability provided by SMAP to continuously map soil moisture conditions over large areas will be a major advance.” 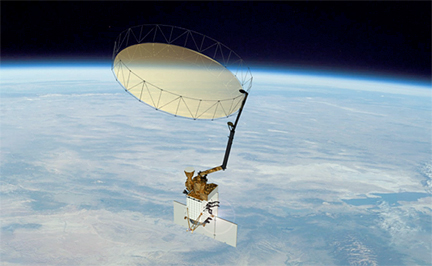 “The best way to get involved in the mission is to be part of the community,” said NASA support scientist Vanessa Escobar, “The best way for commercial users is to get them involved as early adopters, because that’s where you can really start quantifying the value of satellite data. Commercial users are not the traditional community for NASA —  NASA’s about research —  the purpose of early adopters and the purpose of this program essentially is not to look at mission products, it’s to look at mission potential. The best community for that, I think, is the commercial user and the operational user.

“Feedback that scientists have been getting from the early adopters has been so great,” said Escobar. “We got a response, but that’s the early adopters, not necessarily farmers on the ground. We’ve talked to people who did drought models and crop models and they’ve stressed the importance of this, but what we want to do is get down to that level of the decision maker. It is getting to farmers, but what the feedback is from the individual farmer, we have yet to find out. And that’s a survey that would hope to do through the USDA.” 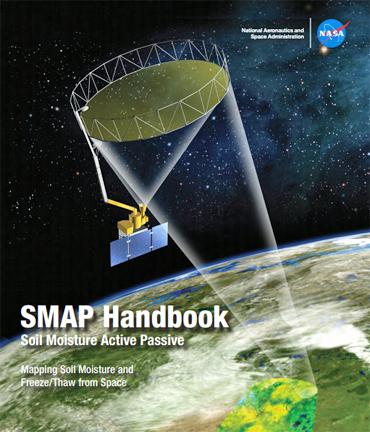 One of the mission’s early adopters out of the UK created Agrisalon, a private company and data fusion center from which he pulls in agricultural and environmental data, including soil moisture, and sends it down to the farmer level, said Escobar. The farmer can then pull up an almanac and essentially get an understanding of what the parameters are, what the forecast models look like, whether they should harvest any sooner or later, or how quickly or later in the season they should plan.

In a SMAP survey conducted in 2012, results revealed that the SMAP user community had a gap between research and policy applications, a high perceived value of soil moisture, and uncertainty as to how ground observations will scale to remotely sensed data, and where to access SMAP-like data. Results show most users associated with SMAP are research/science users and that operational users were under represented - applications will focus on bridging that gap.

“Bridging that gap is really expanding applications and understanding the full potential and the use of the data. In order to do that and to understand that we have to look at science researchers, but we also have to expand that to commercial operations, even policy,” said Escobar.

For more information, please visit the SMAP infosite at http://smap.jpl.nasa.gov/