[SatNews] Arianespace’s “supply pipeline” is supporting the company’s high-activity launch pace planned for 2014, with launcher elements arriving this week in French Guiana for its third flight of the lightweight Vega and another heavy-lift Ariane 5 mission.

These components were delivered by the MN Toucan – one of two sea-going vessels performing rotations between Europe and South America, regularly transporting stages and other hardware for the Ariane 5, Vega and medium-lift Soyuz vehicles that compose Arianespace’s launcher family. 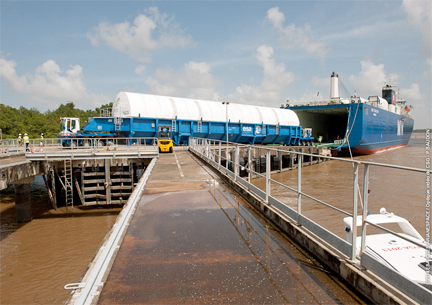 Included in the MN Toucan’s roll-on/roll-off interior cargo bay were the main cryogenic stage for an Ariane 5 to be launched this spring on a mission designated Flight VA218, along with its combined cryogenic upper stage/vehicle equipment bay unit.

Also carried in the cargo bay, as well as on the ship’s upper deck, were components for the Zefiro 23 second stage and Zefiro 9 third stage to be used on Arianespace’s next Vega mission – designated Flight VV03 in the company’s numbering system. This flight will be the third performed from French Guiana by the lightweight vehicle, and is to carry the DZZ-HR high-resolution observation satellite built for the Republic of Kazakhstan by Airbus Defence & Space.

This hardware was unloaded from the MN Toucan after it docked at the city of Kourou’s Pariacabo Port, enabling the transfer by road to the nearby Spaceport.

For 2014, Arianespace’s order book provides payloads for up to 14 launch opportunities, with the company’s objective to perform 12 missions during the year – depending on the availability of satellites.  Based on current planning, this activity would be composed of six Ariane 5 launches, four Soyuz missions and two Vega flights.