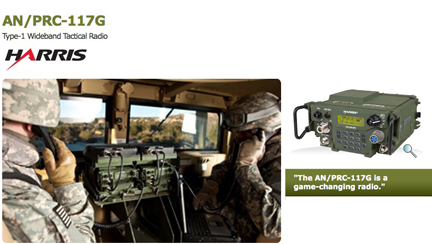 Product infopage
[SatNews] Thanks to this new order, the Company now supplies six countries with their tactical radios...

Harris Corporation (NYSE: HRS) has received a $1.6 million order from the Bundeswehr, the Armed Forces of the Federal Republic of Germany, for Falcon III® AN/PRC-117G multiband manpack radio systems. This order brings to six the number of countries that have adopted the AN/PRC-117G to provide defense personnel with nexgen tactical communications capabilities such as wideband networking. In connection with the order, Harris is supplying German forces with AN/PRC-117G radios and related accessories. Germany will deploy the AN/PRC-117G in support of national and NATO peacekeeping missions. The AN/PRC-117G radio provides warfighters with unprecedented situational awareness of the battlefield by enabling applications such as streaming video, simultaneous voice and data feeds, collaborative chat, and connectivity to secure networks. The wideband networking capabilities of the AN/PRC-117G give warfighters critical real-time information through a man-portable radio that is significantly smaller and lighter than previous manpack radios.