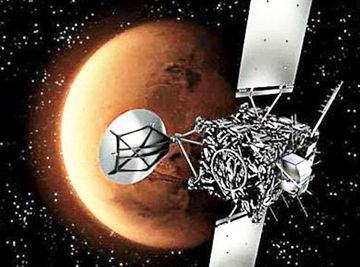 China's Yinghuo-1 Mars probe
China's Yinghuo-1 Mars orbiter was successfully launched on Wednesday morning from the Baikonur Cosmodrome, a Russian-leased launch site in Kazakhstan, Chinese authorities said. The orbiter was launched by a Zenit-2SB rocket at 4:16 a.m. Wednesday, hitching a ride on Russia's Phobos-Grunt (Phobos-Soil) spacecraft, which is an unmanned probe bound for Phobos, the larger of Mars' two moons, according to China's State Administration for Science, Technology, and Industry for National Defence (SASTIND). The Phobos-Grunt and its Chinese passenger reached their scheduled orbit after the rocket disengaged with the Russian spacecraft, the SASTIND said.

As a small-sized research satellite, the Yinghuo-1 will detach from the the spacecraft and begin to orbit Mars in autumn of next year, when the Phobos-Grunt is scheduled to reach Mars. The Yinghuo-1 was launched as part of an inter-governmental cooperative space exploration program between China and Russia. The satellite will orbit Mars for one year, collecting data on the planet's magnetic field, ionosphere, landscape and gravitational field, according to the SASTIND. The 115-kg Chinese probe, which is 75 cm long, 75 cm wide and 60 cm high, was designed for a two-year life. It will not land on Mars nor return to the Earth, and is expected to stay permanently in the space.

The Yinghuo-1's launch follows last week's successful launch of China's Shenzhou-8, an unmanned spacecraft that docked later in the week with the Tiangong-1, a Chinese space lab module. Wu Ping, a spokeswoman for China's manned space program, said after the space docking that China would continue to seek out opportunities for international cooperation in space exploration. 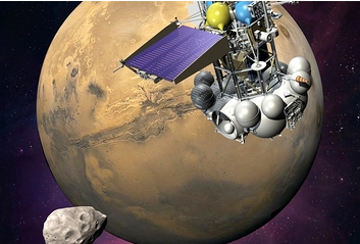 Russia's Phobos-Grunt spacecraft
However, the Russian Mars probe that was launched early Wednesday has failed to reach its intended orbit, Russia's space agency was quoted as saying. The abnormality occurred after the Phobos-Grunt probe had separated from the Zenit-2SB launch vehicle, which blasted off from the Baikonur space center in Kazakhstan at 2016 GMT Tuesday, the RIA Novosti news agency reported. The spacecraft was supposed to use its own booster to reach the designated flying orbit, but failed to do so, the report added. Vladimir Popovkin, head of Russia's space agency Roscosmos, was quoted as saying that mission control lost contact with the probe after the separation. "Now we know its coordinates and we found out that the (probe's) engine failed to start," he added.
Topical Tags :
New Products
Manufacturing
Regulatory/Government
Launch
Satellite Operator
Regional Tags :
Asia/Asia Pacific
Europe