Web Industries Inc. is starting work on a Center of Excellence for space-related thermal management solutions at the firm's Denton, Texas, manufacturing facility. 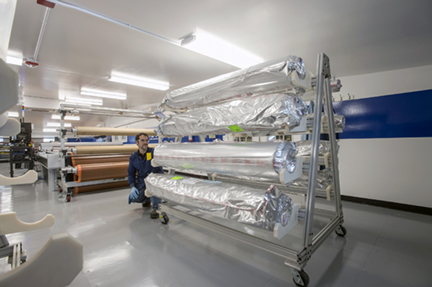 Photo shows an advanced workcell similar to the ones that will be featured at Web's MLI Center of Excellence in Denton, Texas. Photo is courtesy of Web Industries, Inc.

The 10,000-square-foot Center will support Web’s strategy of providing a broad array of thermal insulation products for space/satellite applications. According to Web Industries’ Thermal Insulation Business Development Manager Lee Smith, the Denton expansion will help Web meet the increased demand spurred by the new space race and the continuing proliferation of small satellite constellations. The Center of Excellence will promote lean manufacturing and smoother production flow, and will include new capabilities such as an advanced sewing operation.

The MLI Center of Excellence at Denton is expected to be completed by early 2020.

Smith said that customers that are supporting the new space race come to the company for traditional, multi-layer insulation (MLI) systems but also for sewn or stitched assemblies that are ready for installation by small satellite OEMs. This expansion will allow the company to differentiate the firm's offerings and position Web to meet increased demand in the future.

Web Industries is presenting a showcase of thermal insulation products at the smallsat show in Utah on stand #7T.