Of the more than 1,000 operational satellites in space today, only two—the Hubble Telescope and the International Space Station—were designed to be serviced.

Despite decades of spacecraft design and development, servicing satellites is a challenging prospect for any spacecraft. Satellites typically travel thousands of miles per hour, are not designed to be serviced and, until now, none of the most in-demand satellite-servicing technologies, like a robotic arm and camera, was available on free-flying spacecraft. 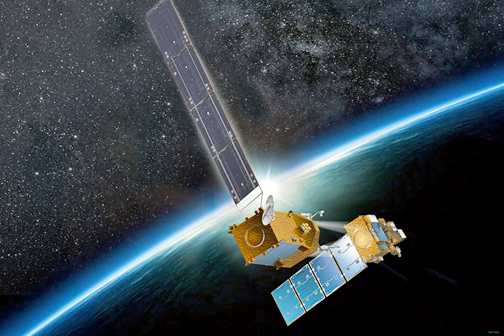 Image is courtesy of SSL.

Draper, in support of NASA’s Restore-L Project and in collaboration with Space Systems Loral (SSL), is addressing this challenge by developing a suite of technologies for servicing government-owned satellites. For the mission, Draper is supporting SSL in using a robotic servicing platform equipped with a camera, robotic arm, fuel reserve and capabilities in GN&C rendezvous and proximity operations. NASA awarded the contract to SSL in 2016.

Until now, being able to rendezvous with, grasp, refuel and re-position a satellite hasn’t been available to commercial markets. Adding to the frustration, ground controllers have had no way to examine satellites closely once they are launched, open them up for service, or refuel them. During the proposed flight mission, ground controllers will closely track Restore-L as it marches through its tasks step-by-step, first to autonomously catch the satellite in orbit more than 400 miles above Earth, then lock on to it, manipulate its fill and drain valve to gain access to its propellant tank, and refuel the satellite, and do almost all of it by itself.

With robotic servicing, satellite owners can extend the lifespan of satellites that are running low on fuel, reaping additional years of service from their initial investment. If a solar array or a communications antenna fails to deploy, a servicer with inspection cameras and repair tools could help recover the asset that otherwise would have been lost, along with the satellites’ anticipated revenue stream.

Draper’s contribution leverages guidance, navigation and control (GN&C) systems it developed for the Apollo and Space Shuttle missions as well as automation developed for the International Space Station and the DARPA Orbital Express program. Draper is a key member in programs that include Orion, Space Launch System, Dream Chaser and Cygnus, and it has worked with the U.S. Department of Defense to develop and demonstrate technologies to cooperatively harvest and re-use valuable components from retired, nonworking satellites in geosynchronous orbit.

Seamus Tuohy, director of space systems at Draper, noted that over time, satellite servicing will grow in scope beyond government agencies and government-owned satellites to the commercial sector. “As we move forward into a future in which commercial entities will be flourishing in Earth orbit, servicing will clearly become a valuable market. Restore-L’s robotic-servicing platform, supported by Draper’s unique experience, can give satellite operators new ways to manage their fleets more efficiently, and derive more value from their initial investments.”