Arianespace—Doubling Up With ASTRA 5B + Amazonas 4A (Launch Preparations)

Direct link to
the Arianespace website.
[SatNews] Payload preparations for Arianespace’s next heavy-lift mission are ready to move into gear, for the ASTRA 5B satellite has arrived in French Guiana.

ASTRA 5B—which Arianespace will launch for Luxembourg-based operator SES—was delivered by an An-124 cargo aircraft to the Félix Eboué Airport near Cayenne this week, approximately one month prior to its targeted December 6 liftoff date with co-passenger Amazonas 4A. 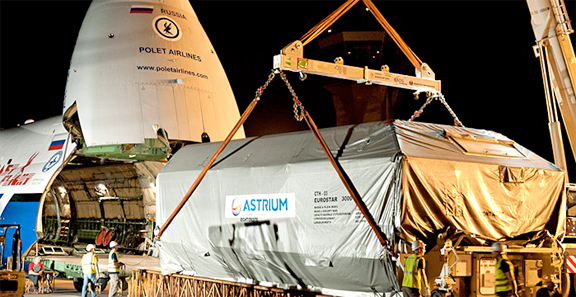 Following its arrival at French Guiana’s Félix Eboué Airport, ASTRA 5B’s container is rigged to be moved from the An-124 cargo jetliner’s unloading ramp to a flatbed trailer, which is used to transfer it by road to the Spaceport.
Photo courtesy of Arianespace.

The Astrium-produced spacecraft’s specialized shipping container was unloaded—aided by the aircraft’s “kneeling” capability—and then prepared for road transport to the Spaceport, which is located some 65 kilometers away in Kourou.

As the upper passenger for Arianespace’s next heavy-lift mission, ASTRA 5B’s estimated liftoff mass is 5,800kg., and it will operate from an orbital position of 31.5 degrees East.

With a launch mass of 3,000kg., Amazonas 4A will join ASTRA 5B on Arianespace Flight VA216 in the lower position of the “payload stack.” This spacecraft, to be located at an orbital position of 61 degrees West, will provide enhanced relay capacity over Latin America and an extended range of communications and television services for operator HISPASAT.

Designated VA216 in the company’s numbering system, this liftoff represents the 216th flight of an Ariane-series vehicle, as well as the fifth heavy-lift launch this year. On its four 2013 missions to date, Ariane 5 has successfully orbited seven payloads with a combined total payload lift performance of more than 50,000kg.