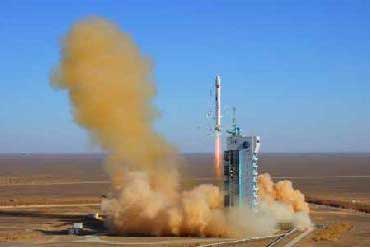 The satellite was made by the DongFangHong company, which was established by the China Aerospace Science and Technology Corporation and the Chinese Academy of Space Technology (CAST). The CZ-2D Long March 2D launch vehicle is a two-stage rocket developed by the Shanghai Academy of Spaceflight Technology. With storable propellants, it is mainly used to launch a variety of low earth orbit satellites, launching a 3,500kg cargo in a 200 km circular orbit. The vehicle’s first stage is the same of the CZ-4 Chang Zheng-4. The second stage is based on CZ-4 second stage with an improved equipment bay.

This launch was the 129th Chinese orbital launch, the 45th orbital launch from the Jiuquan satellite launch Center, the 3rd orbital launch from Jiuquan this year and the 7th Chinese orbital launch in 2010. This was the 128th launch of a Chang Zheng launch vehicle. Also known as the Shuang Cheng Tze launch center, the Jiuquan Satellite Launch Center was the first Chinese satellite launch center. The site includes a Technical Centre, two Launch Complexes, Mission Command and Control Centre, Launch Control Centre, propellant fuelling systems, tracking and communication systems, gas supply systems, weather forecast systems, and logistic support systems. Jiuquan was originally used to launch scientific and recoverable satellites into medium or low earth orbits at high inclinations. It is also the location for all the Chinese manned missions. Presently, only the LA4 launch complex (with two launch pads – SLS-1 and SLS-2) is in use. The first orbital launch took place on April 24, 1970 when the CZ-1 Chang Zheng-1 (CZ1-1) rocket launched the first Chinese satellite, the Dong Fang Hong-1 (04382 1970-034A).

China is gearing up towards the launch of the first Chinese space laboratory, TG-1 Tiangong-1. Recently, Xinhua announced that China had finished construction of its first unmanned space module and that it was now testing the module’s electronic, mechanical and thermal properties. The module will be launched early in 2011 by a modified CZ-2F Chang Zheng-2F launch vehicle. Tiangong-1 will carry out China’s first space docking, with the Shenzhou-8 spacecraft, which will be launched in the second half of 2011. Tiangong-1 and Shenzhou-8 will be launched from the Jiuquan satellite launch Center. Chinese astronauts, including two females, are undergoing training for the space docking. Other missions in the pipeline include the launch of the Chang’e-2 lunar probe, which will start Phase II of China lunar exploration, orbiting the Moon at a 100 km altitude in order to collect data for the soft-landing of Chang’e-3.