Journalist Chris Forrester has posted an item at Advanced TV that the India Space Research Organisation (ISRO) has reported their massive and heaviest-ever GSAT-11 satellite has arrived at its geostationary orbit (at 36,000 km.) and all of the satellite's important solar panels and reflectors have been correctly deployed. 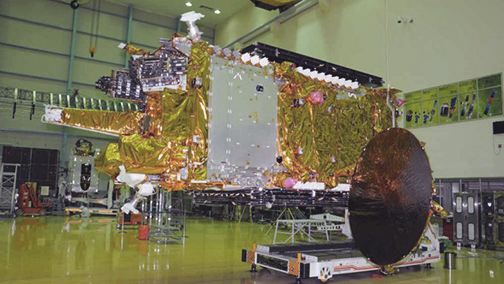 This GSAT-11 photo is courtesy of ISRO.

“Finally home! The communication satellite has been positioned in its designated geostationary orbit with final orbit-raising maneuver… solar panels and reflectors have been successfully deployed,” the space agency stated.

ISRO’s engineers and technicians now have full control of the satellite at the agency’s Master Control Facility at Hassan, in Karnataka.

The 5,854 kg. GSAT-11 will provide high data rate connectivity to users of the Indian mainland and islands through 32 user beams in Ku-band and eight hub beams in Ka-band, according to the space agency said. “GSAT-11 will boost the broadband connectivity to rural and inaccessible regions of the country,” said ISRO.

The satellite weights 5854 kg. and carries 40 transponders (32 Ka- and 8 Ku-band) which, between them, are capable of handling 16 Gb/s throughput.