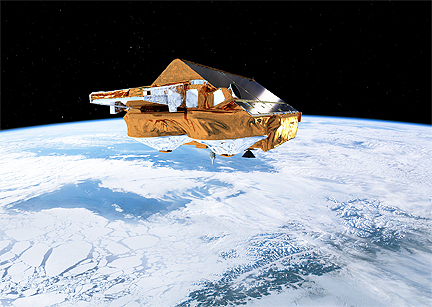 Artistic rendition of the CryoSat satellite, courtesy of ESA.
[SatNews] A European satellite launched in 2010 to measure sea-ice thickness in the arctic...

...is also yielding high-resolution mapping of the ocean floor, scientists say. While the main objective of the polar-orbiting CryoSat is to measure the thickness of polar sea ice and ice sheets that blanket Greenland and Antarctica, its radar altimeter can also measure tiny changes in sea level, the European Space Agency reported Monday. Variation in sea level mimics the rises and dips of the ocean floor beneath due to the pull of gravity, as areas of greater mass such as underwater mountains have a stronger pull, attracting more water and producing a minor increase in ocean-surface height, researchers said. The CryoSat data combined with ongoing ocean mapping will result in global seafloor topography—bathymetry—two to four times more accurate than measurements currently available, they said.

"We know more about the surfaces of Venus and Mars than we do about the bathymetry of deep oceans," David Sandwell from the Scripps Institution of Oceanography in California said. "This new mapping from CryoSat will revolutionize our understanding of ocean floor tectonics and reveal, perhaps, 10,000 previously uncharted undersea volcanoes."