GomSpace’s subsidiary in Luxembourg and the European Space Agency (ESA) have signed a contract of 400,000 euros for the Phase A design of the Miniaturized Asteroid Remote Geophysical Observer (M-ARGO) mission.

Under the contract, GomSpace will be in charge of preliminary design of the mission, spacecraft and implementation planning. A “12U” cubesat spacecraft configuration is envisioned for the mission, packing in beyond state-of-the-art advancements in miniaturized technologies including communication, instrumentation, electric propulsion and operational autonomy to be demonstrated in the deep space environment.

This preliminary concept illustration of the M-Argo spacecraft
is courtesy of GomSpace.

Expected launch of the mission is in 2023, subject to funding of the implementation phase, and it will be the first nanosatellite ever to rendezvous with an asteroid and perform close proximity operations over an extended period for identification of in-situ resources.

The NEO population now has more than 20,000 largely uncharted asteroids and the M-ARGO capability will be able to access the nearest 100 or more in terms of propellant needed to achieve a rendezvous. NEOs are interesting for scientific exploration as well as for the potential of future long-term exploitation of minerals and other useful materials mined from asteroids. In addition, NEOs pose a threat for potential collisions with the Earth, requiring the need for further understanding of their physical properties for future planetary defense purposes. Smallsat technology will allow future cost-efficient exploration of these objects in significant numbers. 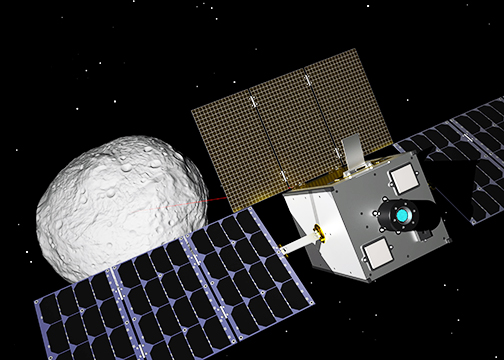 Artistic rendition of the M-ARGO spacecraft on mission. Image is courtesy of ESA-Jacky Huart.

The work will be implemented in Luxembourg in line with GomSpace Group’s ambitions to benefit from the local space ecosystem. The work will be supported by the scientific-technological university, Politecnico di Milano in Italy, providing expert support on deep space mission analysis and navigation of low thrust trajectories associated with electric propulsion.

The contract is funded by the Luxembourg Space Agency through the Fly element of ESA’s General Support Technology Program. The mission implementation beyond the current phase A contract is open to further European cooperation, and to maximize outcome of the mission a scientific committee on asteroid mining is being set up to consolidate the scientific requirements and propose the most suitable instruments for the mission.

GomSpace CEO, Niels Buus, added that activities such as M-ARGO allow the company to develop the firm's internal capabilities and technologies to new levels to the benefit of science and exploration as well as to build competitive advantage for the commercial markets. With these orders, GomSpace is satisfied to have built significant momentum for space exploration capabilities and positions the company well to serve ESA as well as other institutional customers on future ,high-profile long duration missions.