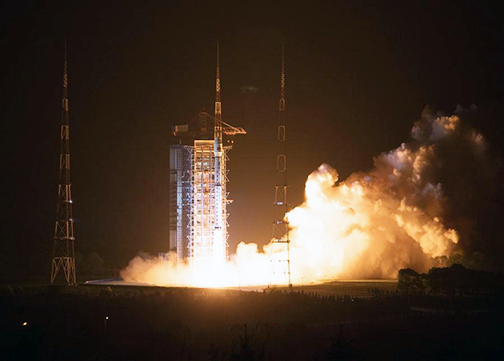 Photo of the Gaofen-5 satellite launch via a Long March 4C rocket from the Taiyuan Satellite Launch Center in northern Shanxi Province.
Photo is courtesy of Xinhua/Jin Liwang.

China has launched the Gaofen-5, a hyperspectral imaging satellite, as part of the country's high-resolution Earth Observation (EO) project.

The Gaofen-5 satellite was launched via a Long March 4C rocket at 2:28 a.m. Beijing Time from the Taiyuan Satellite Launch Center in northern Shanxi Province and this was the 274th flight mission by a Long March carrier rocket. The satellite can be used for comprehensive environmental monitoring and was developed and produced by China Aerospace Science and Technology Corporation with a design life of eight years.

According to Tong Xudong, chief designer of the Gaofen series, Gaofen-5 is the first China-developed satellite that can monitor air pollution. The satellite can monitor air pollutants, greenhouse gases and aerosols. Gaofen-5 is able to obtain spectral information from ultraviolet to long-wave infrared radiation. It is the world's first full-spectrum hyperspectral satellite for comprehensive observation of the atmosphere and land. This satellite has the highest spectral resolution among China's remote sensing satellites and is equipped with six advanced observation payloads that include a shortwave infrared hyperspectral camera and a greenhouse gas detector. Material composition can be investigated through spectral imaging technology.

China will also launch Gaofen-6 this year to form a constellation with other Gaofen satellites on orbit.