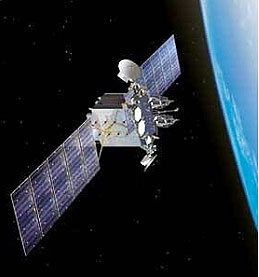 Artistic rendition of the Astra-5B satellite, courtesy of SES.
[SatNews] From the Guiana Space Center, the Company has been signed to launch another SES satellite...

Luxembourg-based satellite operator SES has, once again, selected Arianespace, this time to launch its new Astra 5B satellite. The launch is planned for mid-year 2013. Weighing in at about 5,800 kg at liftoff, Astra 5B will be boosted into geostationary transfer orbit by an Ariane 5 launcher operating from the Guiana Space Center, Europe's Spaceport in French Guiana.

Astra 5B is under construction by Astrium using a Eurostar E3000 platform and will be fitted with Ku- and Ka-band transponders. Positioned at 31.5 degrees East the satellite will provide high-quality broadcast services, VSAT type network data transmission and other broadband services for Europe. Astra 5B will offer a design life of 15 years. Over the last two decades, Arianespace and SES have developed an exceptional relationship. SES operates the leading DTH TV broadcast system in Europe, based on its Astra satellites, serving more than 135 million households via DTH and cable networks. Arianespace also plans to launch the Astra 1N and SES 2 satellites for SES in 2011.