Rockets over Colorado ... it's a good thing ... as United Launch Alliance (ULA) and Ball Aerospace work with K-12 students in the tenth anniversary of the Student Rocket Launch. “I’ve been building rockets since I was a kid, and it was incredibly influential to my choice to go into aerospace as a career,” ULA CEO and president Tory Bruno.

ULA and Ball Aerospace once again collaborated on a hands-on science, technology, engineering and math (STEM) education program with a rocket launch over southeastern Colorado. The tenth anniversary launch commemorated the high point of an experience designed to simulate a real-life launch campaign and inspire students from kindergarten to graduate school to pursue careers in STEM. 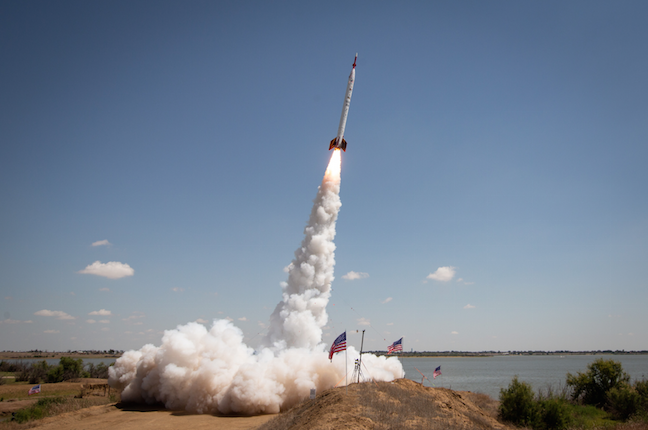 On July 14, ULA’s Future Heavy Super Sport (SS) rocket launched 33 payloads (onboard objects, experiments or instruments that may deploy from the rocket) over Lake Meredith, Colorado.

Working on their own time, ULA interns designed, built and launched the Future Heavy SS rocket with the guidance of mentors. Ball Aerospace mentors volunteered their time to create and test their payloads. Altogether, more than 30 interns and 12 mentors from ULA and 34 interns and 23 mentors from Ball made the 2018 event possible.

“I’ve been building rockets since I was a kid, and it was incredibly influential to my choice to go into aerospace as a career,” said Tory Bruno, ULA CEO and president. “This partnership with ULA and Ball lets students at all levels have a chance to see what it’s like to design, build, test and learn from that process – with the added motivation that their work launches on a rocket.”

“It has been a pleasure collaborating with ULA on the student rocket launch for the past 10 years,” said Rob Strain, president, Ball Aerospace. “This exciting opportunity for our interns is a fun learning experience for them to understand what a career in aerospace is like by participating in a program from concept to launch.”

In honor of the 10th anniversary event, ULA introduced a twist – a payload competition for K-12 teams. Eleven teams competed to win up to $5,000 by designing a craft to return the payload to a pre-appointed location near the launch site. The payloads were too widely dispersed to measure distance accurately, so team scores on pre-launch design reviews determined the winners.

Since the Student Rocket Launch’s first launch in 2008, nearly 800 interns from ULA and Ball have participated in the program under guidance from more than 200 mentors. In total, ULA’s interns have designed, built and launched 31 rockets carrying more than 200 payloads from five different locations.