Aireon LLC  has signed a credit facility agreement for $200 million with a group of several independent investor funds, led by Deutsche Bank — this credit facility provides Aireon with the resources to fund various company initiatives and to continue to pay Iridium for the costs related to the integration, launch and hosting of the AireonSM payload on each of the 81 Iridium® NEXT satellites — the agreement was signed on December 21st, 2018 and this announcement comes just days after the final launch of Iridium NEXT satellites and their Aireon hosted-payloads. 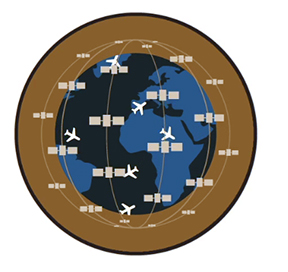 The 11 long-term contracts signed with the firm's launch Air Navigation Service Provider (ANSP) customers have provided Aireon with a strong financial foundation. Aireon has already started paying the US$200 million hosting fee owed to Iridium, and this new credit facility has enabled the company to pay another US$35 million in 2018 for a total of US$43 million to date.

The Aireon system is scheduled to go live in the first quarter of 2019, beginning with operational trials over the North Atlantic Ocean with the Canadian and British Air Navigation Service Providers (ANSPs), NAV CANADA and NATS. Additional deployment will occur in NAV CANADA’s Edmonton airspace. Once operational, the Aireon system will enable a complete global picture of international air traffic, in real time, offering air traffic controllers, airline operators and industry stakeholders the first ever and never-before-possible visibility of global air traffic.  This capability will usher in an era of enhanced safety, as well as enable on-the-fly route adjustments, more direct flightpaths, improved fuel efficiency and increased predictability.

Rich Nyren, CFO, Aireon, said this credit facility is a vote of confidence in Aireon’s business model and a testament to the team, technology, investors and the company's role in the future of the aviation industry. Iridium, as one of the founding partners with NAV CANADA, enabled the Aireon opportunity through its $3 billion investment in the incredible Iridium NEXT satellite constellation.  Aireon has benefited by this relationship, and this facility now provides a vehicle by which Aireon can more quickly pay Iridium for access to this prime real estate on orbit.