Bringing Severe Weather Under The Watchful Eye Of UAVs 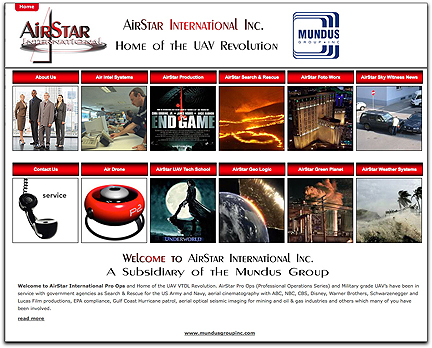 Mundus Group, Inc. has announced AirStar Weather Systems will continue VTOL UAV patrols for government agencies in the Gulf Coast States, providing real time data on "lookout" for hurricane Bill. After Ike in 2008, AirStar delivered 12 Weather System Drones, state of the art unmanned air vehicles, to Texas, Louisiana, and Gulf coast government agencies for hurricane observation and early warning systems. Ike was blamed for at least 195 deaths. Of these, 74 were in Haiti, which was already trying to recover from the impact of three storms earlier that year: Fay, Gustav, and Hanna. In the United States, 112 people were killed, and 34 are still missing. Damages from Ike in US coastal and inland areas are estimated at $24 billion (2008 USD), with additional damage of $7.3 billion in Cuba, $200 million in the Bahamas, and $500 million in the Turks and Caicos, amounting to a total of $32 billion in damages.

AirStar Weather Systems (AWS) is a dual-purpose service provider, primarily marketed as an advanced meteorological technology drone. AirStar's remote controlled UAV VTOL is equipped with technologies providing real time analysis information, that when used with regional and county wide weather network services, provides a cost effective solution for gathering enhanced real time data for weather systems predictions with greater accuracy. AirStar Weather System's greatest strengths and appeal are in its protection of life and property with unmanned performance as an early warning system during national emergency weather alerts for severe thunder storms and hurricanes to coastal cities and across the "tornado alley" from Oklahoma and Texas panhandle through Kansas and Nebraska and the world.

Just as important, AWS' second mode or purpose is provided after the storm to search for survivors and observe and protect against looters and report fires, floods and damage to infrastructure while providing visual inspection and life saving information to rescue teams in areas that would be impossible to reach by ground. The National Oceanic and Atmospheric Administration's Weather Service Climate Prediction Center said Thursday that there could be as many as three major hurricanes during this year's 2009 Atlantic hurricane season. Forecasters at the Center said there's a 70 percent chance of having nine to 14 named storms, of which four to seven could become hurricanes. One to three of those could become major hurricanes, defined as Category 3, 4 or 5 storms. Following its plan to maximize the commercial technological potential of its patented state of the art VTOL UAV Drone technology, parent company Mundus Group and subsidiary AirStar International have formed the AirStar Weather Systems division to provide a dedicated service to coastal communities, offshore oil and gas interests, as well as to meteorological agencies world wide. AirStar Weather Systems can function as part of an enhanced weather systems' analysis network or a "stand alone" severe thunderstorm, tornado and hurricane early warning and patrol system. The AirStar Weather Systems division will support those AirStars currently in service with government agencies on Gulf Coast patrol since Hurricane Ike.