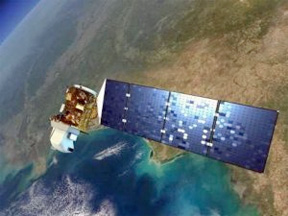 Artistic rendition of the
Landsat 8 satellite.
[SatNews] NASA has handed over the operational control of the Landsat 8 to the U.S. Geological Survey's Earth Resources Observation and Science Center (EROS) in Garretson, South Dakota. The center began sharing the more than 20,000 images the satellite has taken since April with agencies, governments and individuals around the world—one hour after "opening their doors," the EROS center’s servers were seeing 110 percent of their normal activity.

The official ceremony handing over control of the satellite from NASA to EROS included addresses from several prominent officials including South Dakota Sen. Tim Johnson and acting director of USGS Suzette Kimball.

Landsat 8 was the first satellite in the 40 year history of the EROS center that USGS and EROS personnel were involved from the beginning of a satellite’s design, according to EROS director Frank Kelly. Landsat 8’s ground systems and software were designed and built at the EROS center in Sioux Falls, Kelly said. “It’s a real exciting time for us, to design the ground system software and now to be operating it,” Kelly said.

The satellite itself will help EROS track changes in the Earth’s climate and how land uses are changing as the world’s population increases according to senior USGS scientist Tom Loveland. The technology included in Landsat 8 provides researchers with the ability to see deeper into oceans and changes in the landscape. “This will significantly advance our understanding of land change,” Loveland said. (Source: ArgusLeader.com.)