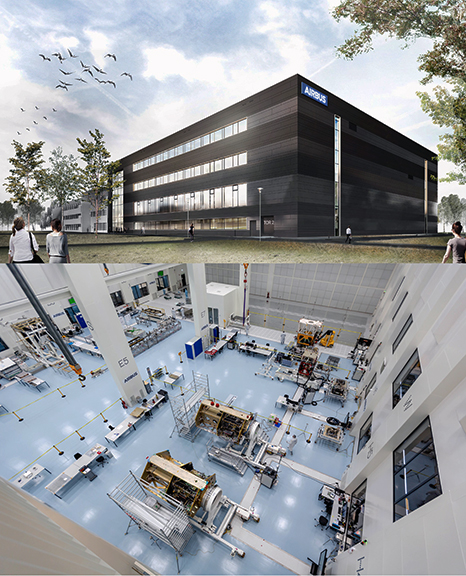 The ITC, which triples the area of clean room space to 4,200 m2, is dedicated to building satellites, probes, space instruments and experimental technologies. The centre took only two years to build at a total cost of approximately 45 million euros.

With dimensions of 70 x 60 meters and a ceiling height of up to 18.50 meters, the building was designed to expand the current satellite integration hall. The new ‘dual’ complex enables projects to be executed more efficiently and economically and, thanks to cutting-edge technology and its new size, also offers new possibilities for developing future space projects, such as large space telescopes.

The centerpiece of the ITC is its large clean room. The final integration of the satellites takes place under clean room conditions of various ‘cleanliness classes’ (from ISO 8 to ISO 5) in facilities totaling approximately 2,100 m2, of which 400 m2 are dedicated to ISO 5. Extensive air conditioning and filter systems circulate an air volume of 900,000 m3 up to 60 times an hour, which not only ensures the required levels of cleanliness but also a consistently elevated air pressure, in addition to controlling humidity and temperature.

Baden-Wuerttemberg’s Minister-President, Winfried Kretschmann, said that Airbus’s significant investment in this building also represents an investment in the future — both for the Airbus site at Lake Constance and for Baden-Wuerttemberg as an aerospace location. When it comes to space technology, this investment is a step ahead of the rest of Germany — in terms of science and research, development and technology, and enthusiasm for the aerospace industry. With this technology center, Airbus has shown it has the courage to take the leap into a new age of even better satellites, and this includes those intended for scientific purposes. Satellites can, for instance, document changes in sea levels and detect even small sources of greenhouse gas emissions. Satellites of this nature are helping to expand the basic scientific knowledge needed to combat climate change.

Nicolas Chamussy, Head of Airbus Space Systems, commented that space flight has undergone huge positive development over the past few years. In addition to scientific missions to explore the solar system and investigate fundamental physical laws, the company is meeting a swiftly increasing demand for high-performance, ultra-reliable Earth Observation, meteorological and navigation satellites. Thanks to the new satellite hub, production at Airbus’s Friedrichshafen site is optimally positioned in terms of both quality and quantity compared with competitors.”

Four seismic blocks, each weighing 150 tonnes, ‘decouple’ special integration tables from the building and ensure a completely vibration-free environment for the installation of optical instruments. A computer-controlled fan and filter matrix on the south side of the clean room generates air-flow profiles that can be adjusted to the occupancy of the room. This concept allows different clean room classes to be created in a single hall with no disruptive partitions or curtains.

In the adjacent check-out rooms, technicians can conduct a broad array of electrical function tests without having to enter the clean room area. All computer systems are housed in their own air-conditioned, noise-insulated racks.

The two wings of the ITC provide a further 1,100 m2 of integration and laboratory space for component manufacturing and technical areas. The first floor of the building’s west wing houses a conference zone and a multifunctional showroom and information space, whose large panoramic windows provide a unique view of the flight hardware production process.

Four Sentinel satellites for the European environment and security programme ‘Copernicus’, the joint European-Japanese EarthCARE Earth observation satellites and two 12.30-metre-long planar radar antennas are the first projects to move into the new centre. The integration work for JUICE, a mission to the icy moons of Jupiter (set to launch in 2022), is also expected to start within the next six months.