[SatNews] The Seagull nebula, seen in this infrared mosaic from NASA's Wide-field Infrared Survey Explorer, or WISE, draws its common name from it resemblance to a gull in flight. But it depends on your point of view. 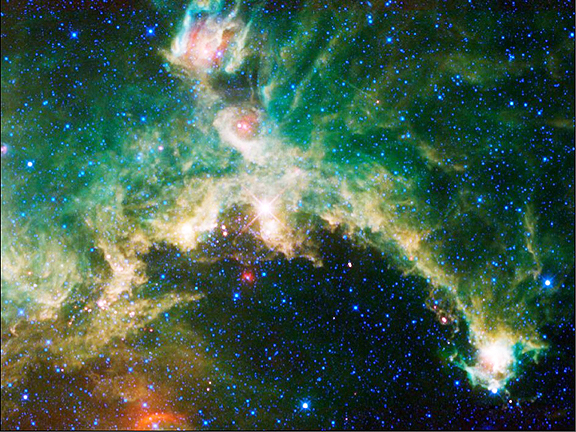 When the image is rotated 180 degrees it bears a passing resemblance to a galloping lizard — or perhaps a dragon or a dinosaur. The image spans an area about seven times as wide as the full moon, and three times as high (3.55 by 1.37 degrees), straddling the border between the constellations Monoceros and Canis Major (the Big Dog). So you might say this lizard is running with the Big Dog, while the gull is flying from it. Astronomers catalog the nebula as IC 2177. This cosmic cloud is one of many sites of star formation within the Milky Way galaxy. It is located 3,800 light-years away from Earth, inside the Orion spur— the same partial spiral arm of the Milky Way where our solar system is located. The nebula is nearly 240 light-years across.

WISE is an all-sky survey, snapping pictures of the whole sky — from asteroids to stars to powerful, distant galaxies.