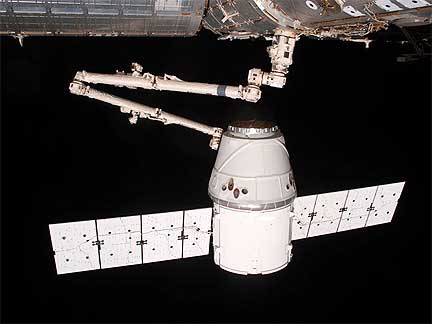 View from the International Space Station of the SpaceX Dragon spacecraft as the station's robotic arm moves Dragon into place for attachment to the station. May 25, 2012.
Photo is courtesy of NASA
[SatNews] SpaceX has completed an important design review of the...

...crewed version of its Dragon spacecraft. The concept baseline review presented NASA with the primary and secondary design elements of its Dragon capsule designed to carry astronauts into low Earth orbit, including the International Space Station. SpaceX is one of several companies working to develop crew transportation capabilities under the Commercial Crew Development Round 2 (CCDev2) agreement with NASA's Commercial Crew Program (CCP). Through CCDev2, NASA is helping the private sector develop and test new spacecraft and rockets with the goal of making commercial human spaceflight services available to commercial and government customers.

In the June 14 review conducted at the company's headquarters in Hawthorne, California, SpaceX provided details about each phase of a potential crewed mission. This included how the company plans to modify its launch pads to support such missions, Dragon's docking capabilities, the weight and power requirements for the spacecraft, and prospective ground landing sites and techniques. The company also outlined crew living arrangements, such as environmental control and life support equipment, displays and controls. 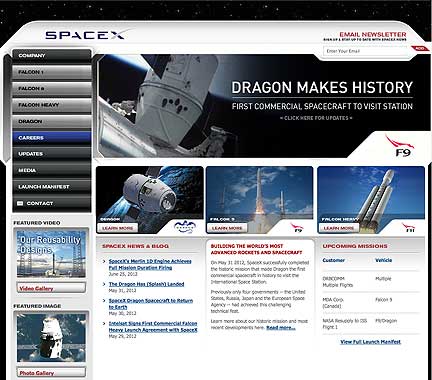 Safety was a key focus of the review. The SpaceX team presented NASA with analyses on how its SuperDraco launch abort system would perform if an emergency were to occur during launch or ascent. The review also outlined plans for getting astronauts away from danger quickly and safely on the way to low Earth orbit, in space and during the return home. All of NASA's industry partners, including SpaceX, continue to meet their established milestones in developing commercial crew transportation capabilities under CCDev2.

While NASA works with U.S. industry to develop commercial spaceflight capabilities to low Earth orbit, the agency also is developing the Orion spacecraft and Space Launch System (SLS), a crew capsule and heavy-lift rocket, to provide an entirely new capability for human exploration of deep space. Designed to be flexible for launching crew and cargo missions, Orion and SLS will expand human presence beyond Earth and enable new missions of exploration across the solar system.