[SatNews] Astrium has been commissioned to build two new research satellites for...

...NASA’s Jet Propulsion Laboratory (JPL) (Pasadena, California). The agreement was signed in Friedrichshafen, Germany. For a minimum of five years from August 2017, the Gravity Recovery and Climate Experiment Follow-On (Grace FO) mission will continue the extremely accurate measurement data collection of the first twin Grace satellites, which have been in orbit since March 17, 2002. Astrium’s Grace satellites have been making a hugely important contribution to global climate research since 2002. Based on their observations of changes in the Earth’s gravity field over time, geoscientists are gaining new insights into the dynamic processes in the planet’s interior, into deep and surface currents in the oceans, and into variations in the extent of ice coverage at the poles, in Greenland and over mountain ranges. The original Grace mission allowed scientists for the first time to identify which masses of water, ice and solid material are moving; Grace is even able to provide long-term observation of water table levels around the world.

Each of the Grace FO satellites measures approximately 3 x 2 x 0.8 metres and weighs around 580kg. Like their predecessors, they will be placed in a polar orbit at an altitude of some 500 kilometres and follow each other 220km apart. As they fly, the two satellites constantly and extremely precisely determine the distance between them, which varies under the influence of the Earth’s gravity; this fluctuating distance provides the data for continued measurement of our planet’s gravity field. 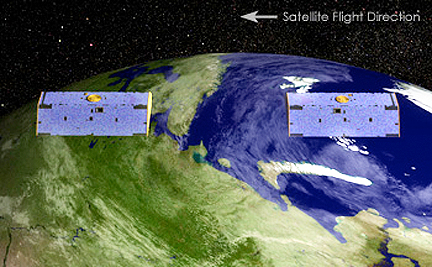 The measurements taken by the Grace FO satellites will be exceptionally accurate as their positions will be minutely ascertained using on-board GPS (Global Positioning System) receivers, while a satellite-to-satellite microwave link will enable the exact distance between them to be calculated to within a few thousandths of a millimetre. In contrast to the original Grace mission, the distance between the new satellites will also be measured using lasers—a technological experiment in preparation for future generations of gravity-research satellites.

Throughout the five-year mission, these measurements will be used to generate an updated model of the Earth’s gravitational field every 30 days. In addition, every day each satellite will create up to 200 profiles of temperature distribution and water vapour content in the atmosphere and ionosphere. With this new two-satellite contract, Astrium in Friedrichshafen is building on the success of its unique series of small satellites. Numerous important scientific missions, such as Champ, GOCE and Swarm, have been based on Astrium’s satellite platform. The Grace satellites, launched in 2002, have now been successfully carrying out their mission for double their nominal five-year service lifetime. Moreover, they were delivered to NASA on time and on budget.