Harris To Capture The Earth Every Five Minutes... 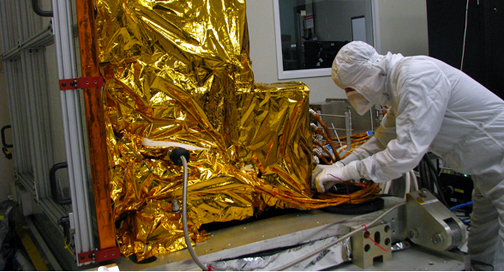 The instrument is complete and will be ready for future integration onto NOAA’s next-generation weather satellite series. ABI is a highly  advanced geostationary weather instrument and captures continuous images of Earth—scanning the entire globe in five minutes versus 26 minutes with the currently operational GOES satellites. For rapidly changing events such as thunderstorms, hurricanes, or fires, ABI can take images as often as every 30 seconds. ABI also will provide images of conditions current GOES satellites cannot including dust, sea ice, volcanic ash, fog, clouds, water vapor, vegetation, winds and carbon dioxide.

An international version of ABI is operational over Japan onboard the Himawari-8 satellite, where the spacecraft has tracked storms such as Typhoons Nepartak and Soudelor. Harris has built seven ABIs: four for the United States, two for Japan, and one for South Korea.

Harris also built the ground system for NOAA’s GOES-R series of satellites, which will command and control the satellites and all instruments on board, and process 60 times more data than today’s GOES satellites. The ground system will make it possible for meteorologists to receive critical weather data in 30 seconds by using a customized high-speed processing infrastructure designed to reduce information bottlenecks caused by the high data volume.

Eric Webster, the Vice President, Harris Environmental Solutions, related that every second counts during severe weather events. ABI can scan a thunderstorm 22,300 miles from Earth in the same time as it takes to snap and upload a selfie to social media. ABI will improve every aspect of severe weather forecasting, which will help save lives and property.