GU Orbit is a multi-disciplinary, student-led society with the objective of developing their own satellite technology to encourage students into the world of space systems and to enable researchers to play an active role in the growing UK space industry. Glasgow already produces more satellites than any other city in Europe, with companies such as Spire and Clyde Space placing the city at the forefront of the European sector.

With Minister Ivan McKee last year announcing that the Scottish space sector could be worth as much as £4 billion by 2030, the work being done around space technology and data by Universities such as Glasgow, Strathclyde and Edinburgh, will play an important part in equipping students with the transferable skills to provide the nation with the next generation of aerospace engineers and rocket scientists. 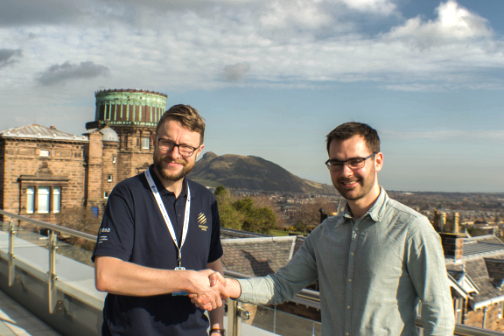 Responsive Access, based at Edinburgh’s Royal Observatory building, is a participant in the ESA BIC UK, a prestigious business incubation program funded by the European Space Agency and the UK Science and Technology Facilities Council. The company aims to simplify access to space for cubesats and to play a critical role in supporting the vibrant satellite production industry by handling their customers’ mission management planning, essentially acting as a “one stop shop” to alleviate challenges around logistics, testing, insurance, and selecting the most suitable rocket to carry each payload into orbit.

Responsive Access’ Chief Executive, Andrew Paliwoda, stated that the organization is pleased to have signed an agreement with GU Orbit and the team has already started the process of identifying a suitable launch opportunity for their cubesat through one of the many available launch vehicle partners.
He added, “It’s been an exciting few months for us, with financial backing for our project coming from the European Space Agency, Heathrow Airport, and the Department for International Trade, while our team has also had the opportunity to visit the facilities of potential rocket partners, such as Virgin Orbit and Relativity Space in California, as well as launch vehicle developers here in Scotland. For us, the key to success is to match our satellite customers with launch opportunities that best align with their needs.”

Responsive Access Ltd. aims to simplify access to space through the use of innovative software and key partner relationships that provide a one-stop-shop for the launch of CubeSats and other small payloads into orbit.

While the search for a suitable rocket gets underway, GU Orbit are focusing on the technical development of their satellite, which is set to become the first ever to be fully built by a Scottish university. The University of Glasgow’s satellite could be set for launch by as early as next year, creating the possibility for it to be one of the first payloads to reach space from a developing UK spaceport.

GU Orbit’s President, Philip Voudouris, explained that thanks to the tremendous effort from the team members, significant progress on the cubesat, Astraeus-01, has been made, finally bringing ideas and ambitions to life as prototypes are manufactured and tested. The University of Glasgow has a strong reputation regarding its involvement in space technology and having opened its first space lab just last year, it has shown that it is prepared to push the boundaries of human presence in space. With Responsive Access helping to plan the mission ahead and selecting a suitable launch vehicle for Astraeus-01, the company is now one large step closer to seeing this satellite reach orbit and subsequently opening an exciting new frontier for students and researchers with a passion in space.