DigitalGlobe Reveals A Syria Neighborhood Watch(es) As It Burns (Imagery)

[SatNews] A neighborhood ablaze, not from wildfire such as recently in Colorado, but due to violence, is now evidenced from air...

Qabun, Damascus, Syria-July 18, 2012:  This is a satellite image of the Qabun neighborhood in Damascus, Syria where violence has been reported over the last 24 hours. 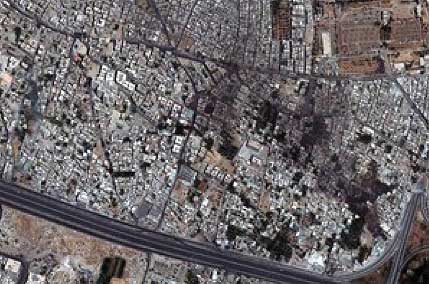 Providing a virtual presence is what DigitalGlobe does best, by rapidly delivering shareable, high-resolution imagery of places affected by natural disasters to aid first responders and personnel on the ground.