...Antares rocket at 5:00 p.m. EDT from the new Mid-Atlantic Regional Spaceport Pad-0A at the agency's Wallops Flight Facility in Virginia. This test flight was the first launch from the pad at Wallops and was the first flight of Antares, which delivered the equivalent mass of a spacecraft, a so-called mass simulated payload, into Earth's orbit. 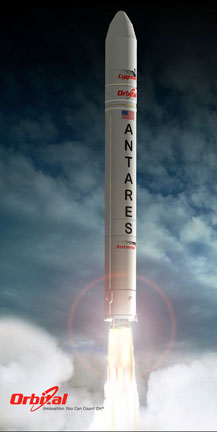 Artistic rendition of Antares launch courtesy of
Orbital Sciences.
"Today's successful test marks another significant milestone in NASA's plan to rely on American companies to launch supplies and astronauts to the International Space Station, bringing this important work back to the United States where it belongs," said NASA Administrator Charles Bolden. "Congratulations to Orbital Sciences and the NASA team that worked alongside them for the picture-perfect launch of the Antares rocket. In addition to providing further evidence that our strategic space exploration plan is moving forward, this test also inaugurates America's newest spaceport capable of launching to the space station, opening up additional opportunities for commercial and government users."

The test of the Antares launch system started with the rocket's rollout and placement on the launch pad April 6th, and culminated with the separation of the mass simulator payload from the rocket. The completed flight paves the way for a demonstration mission by Orbital to resupply the space station later this year. Antares will launch experiments and supplies to the orbiting laboratory carried aboard the company's new Cygnus cargo spacecraft through NASA's Commercial Resupply Services (CRS) contract.

"Today's successful test flight of Orbital Sciences' Antares rocket from the spaceport at Wallops Island, Virginia, demonstrates an additional private space-launch capability for the United States and lays the groundwork for the first Antares cargo mission to the International Space Station later this year," said John Holdren, director of the Office of Science and Technology Policy. "The growing potential of America's commercial space industry and NASA's use of public-private partnerships are central to President Obama's strategy to ensure U.S. leadership in space exploration while pushing the bounds of scientific discovery and innovation in the 21st century. With NASA focusing on the challenging and exciting task of sending humans deeper into space than ever before, private companies will be crucial in taking the baton for American cargo and crew launches into low-Earth orbit. I congratulate Orbital Sciences and the NASA teams at Wallops, and look forward to more groundbreaking missions in the months and years ahead." 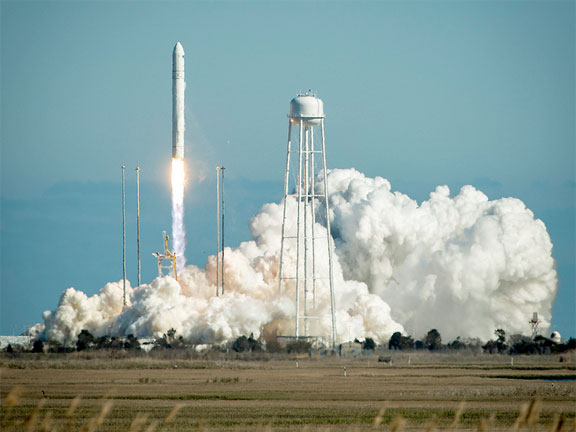 The Orbital Sciences Corporation Antares rocket is seen as it launches from Pad-0A of the Mid-Atlantic Regional Spaceport (MARS) at the NASA Wallops Flight Facility in Virginia, Sunday, April 21, 2013. The test launch marked the first flight of Antares and the first rocket launch from Pad-0A. The Antares rocket delivered the equivalent mass of a spacecraft, a so-called mass simulated payload, into Earth's orbit.
Photo Credit: (NASA/Bill Ingalls)

Orbital is building and testing its Antares rocket and Cygnus spacecraft under NASA's Commercial Orbital Transportation Services (COTS) program. After successful completion of a COTS demonstration mission to the station, Orbital will begin conducting eight planned cargo resupply flights to the orbiting laboratory through NASA's $1.9 billion CRS contract with the company. NASA initiatives, such as COTS, are helping to develop a robust U.S. commercial space transportation industry with the goal of achieving safe, reliable and cost-effective transportation to and from the International Space Station and low-Earth orbit. NASA's Commercial Crew Program also is working with commercial space partners to develop capabilities to launch U.S. astronauts from American soil in the next few years.