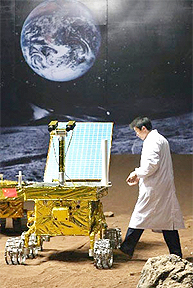 China's Chang'e-3
[SatNews] According to the Xinhua News Agency, China plans to launch...

...20 spacecrafts this year, including the country's third lunar probe Chang'e-3 and manned spacecraft Shenzhou-10, China Aerospace Science and Technology Corporation (CASC) announced Wednesday. The country is scheduled to conduct a manned space docking test between orbiting target module Tiangong-1 and Shenzhou-10, the corporation said during an internal work conference. The Chang'e-3 moon probe is expected to land and stay there during the second stage of the country's lunar probe program, it said. According to CASC, by 2020, China will have more than 200 spacecrafts operating in orbit, accounting for about 20 percent of the world's total.