Additionally, the Ground Segment CDR review has been recently conducted successfully. These milestones certify that the maturity of the design is appropriate to proceed with full-scale fabrication, assembly, integration and testing of the different mission elements.

Formation flying will be key in future space science missions. For instance, it will allow the development of large space telescopes with essential features (such as lens and detectors) that are very far apart but still need to maintain a stable relative distance and position. This, in turn, will enable their implementation without the need for heavy and bulky deployable structures that might not fit within a launcher or boost launching and operational costs. 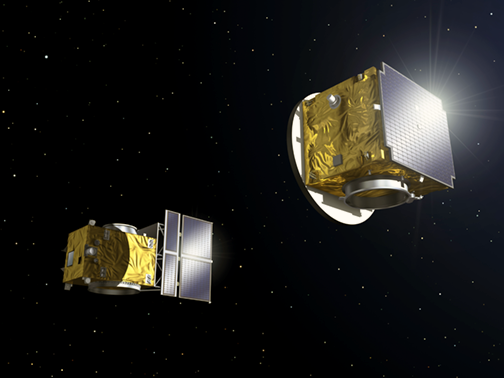 Artistic rendition of the Proba-3, a double satellite mission that will investigate close formation-flying in orbit.

Proba-3 will also perform the Sun’s corona science observation. To do so, the paired satellites will together form a 150 meter long solar coronagraph to study the Sun’s faint corona closer to the surface than has ever been achieved before. The satellites will form a so-called ‘externally occulted’ coronagraph, with the satellite imager shielded from glaring sunlight by an occulting disk on the other satellite. This will be achieved autonomously, without relying on the ground for active control of the formation, creating a six-hour artificial eclipse every day over the second probe.

Assembly, integration and verification has already been started and is at full speed, with the aim of launching Proba-3 in two years time. After a typical Launch and Early Operation Phase (LEOP), a significantly longer Commissioning Phase will take place where the Industry will operate the system before its formal delivery to the European Space Agency for their operation during the rest of the mission life, reaching a total of 2.5 years.

SENER Aeroespacial leads the Proba-3 mission, with full system responsibility and in close cooperation with a core industrial team constituted by QinetiQ Space nv, Airbus Defence and Space Spain, GMV Space and Defence and Spacebel, also involving a wide industrial consortium of more than 20 companies from 14 different countries. This is the first time that a Spanish company heads the complete implementation (at system level) of an ESA mission.

Proba-3 is part of ESA GSTP (General Support Technology Programme) and the Spanish participation has been possible thanks to the support of CDTI (Centro para el Desarrollo Tecnológico e Industrial).