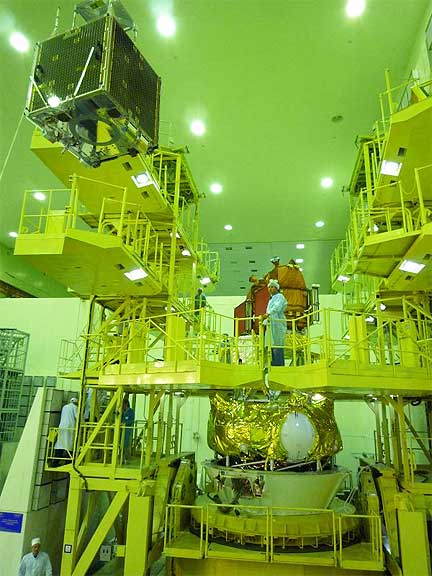 exactView-1 being lifted on to the Fregat,
photo courtesy of SSTL.
[SatNews] Surrey Satellite Technology Ltd (SSTL) has announced the successful separation from the Soyuz launcher and...

...subsequent operation of mission-critical systems onboard the exactView-1 satellite, which was built by the Company under contract to prime contractor COM DEV Canada for exactEarth.

exactView-1 separated from the Soyuz launch vehicle’s Fregat upper stage in low Earth orbit approximately 2-1/2 hours after launch. SSTL has since established communications with the satellite in its 817km sun synchronous orbit from SSTL’s Guildford mission control centre and is receiving telemetry and commanding the spacecraft. Initial system checks have confirmed that critical systems such as power, avionics, telecommand and control are all functioning as expected, and the solar panel has been deployed.

SSTL will continue the commissioning of the satellite in orbit. Once all platform systems are operational, engineers from COM DEV Canada will work alongside the SSTL ground operations team to commission its highly advanced Automatic Identification System payload.