RapidEye, who owns and operate a constellation of five identical Earth Observation satellites, announced it has completed a baseline image campaign covering the Helmand river basin in Afghanistan. The project was requested with an imaging window from November 3rd to December 4th, 2009 with the majority of the collection taking place during a 10 day from November 18th to 28th. 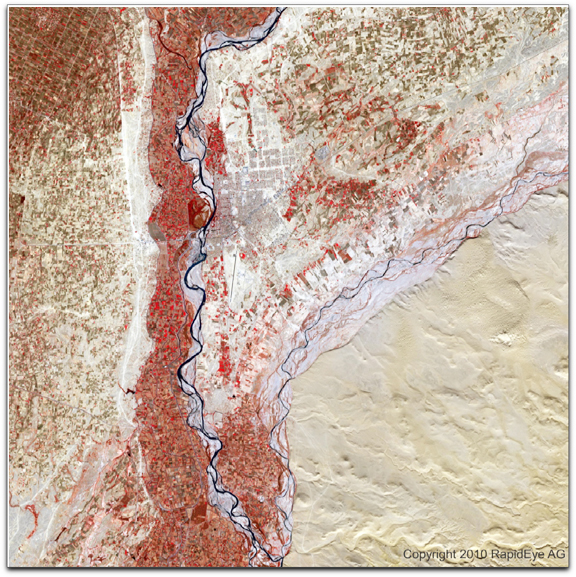 Covering over 250,000 square kilometers, the Helmand river basin is the largest in Afghanistan, accounting for almost half of the country's territory. It is the world’s largest opium production region. The project was initiated to obtain baseline imagery maps and ground cover information prior to the beginning of the 2010 growing season. As the river basin contains the largest production of opium in Afghanistan, it is essential to understand growth patterns and estimate yields in this area as part of the United Nations (UN), US and other efforts to suppress production. The wholesale value of the opium trade in Afghanistan was estimated at about US$3 billion in 2008. With its red-edge band and broad area coverage, the RapidEye satellite constellation is ideally suited for collecting and characterizing agricultural fields and can contribute greatly to these efforts.

Timeliness and accuracy of information is key when providing frequent agricultural monitoring. The RapidEye constellation of five satellites has the unrivaled ability to image individual fields, counties, states or countries on a frequent revisit cycle. The Helmand river basin project reinforced these capabilities, as the area around and including Lahkar Gah, the capital city of Helmand, was collected seven times in 23 days. RapidEye’s satellites can collect up to 4 million square kilometers of Earth Observation imagery every day and revisit any region on Earth on a near-daily basis thus assuring quick and reliable coverage of large areas at high resolution. The imagery covering the Helmand river basin is now available for purchase to clients and partners worldwide. Additionally, many more million kilometers of Earth Observation data can be accessed through the RapidEye Library, which contains their entire catalog of products including their most recently collected satellite imagery, or through the RapidEye Geodata Kiosk by visiting www.geodatakiosk.com.