China... Bringing The Two Together (Spacecraft)

[SatNews] The second docking has occurred...

China successfully completed on Monday the country's second space docking that linked the unmanned spacecraft Shenzhou-8 again with the prototype space lab Tiangong-1, according to the mission's control center. About half an hour before the re-docking, Shenzhou-8 had disengaged from Tiangong-1 after a 12-day flight together. Shenzhou-8, launched on November 1, rendezvoused and docked with the target orbiter Tiangong-1 on November 3rd in an orbit 343 km above earth, marking China's first space docking a success. Tiangong-1 has been in orbit since its launch on September 29.

The Beijing Aerospace Control Center (BACC), which commanded the Shenzhou-8 mission, called the re-docking a success, during which functions of the measuring equipment and docking mechanism were tested in solar light. Following the re-docking, the coupled spacecraft will fly together for two more days before the scheduled return of Shenzhou-8 to earth, Wu Ping, spokeswoman for the manned space program, said earlier. The BACC said Monday that after the successful docking tests, the center will further modify the parameters of the orbit for Shenzhou-8 to return based on data collected through close monitoring over the procedures.

Prior to its return, Shenzhou-8 will re-disengage from Tiangong-1 and fly alone for a period of time, instead of immediately returning to Earth, Li Jian, deputy chief engineer of BACC, said. "Acquisition of the space docking technology is vital to China for implementing the three-phase development strategy of its manned space program," spokeswoman Wu said. Another two docking missions with Tiangong-1 have been planned next year, and at least one will be manned, Wu said. China plans to establish its own space lab around 2016 and a manned space station around 2020, she said. (Source: China Daily) 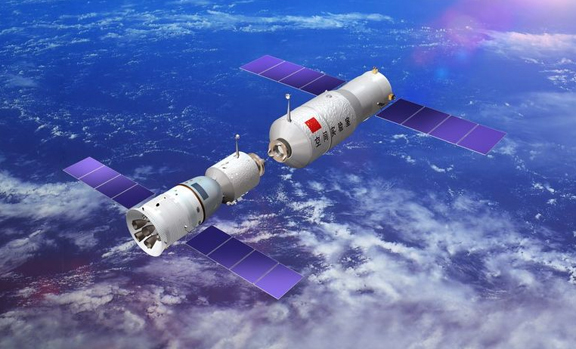 Artistic rendition of the docking of Shenzhou-8 and Tiangong-1