Since the end of July, the Brazilian municipality of Moquem had been the site of the largest religious festival in the state of Goiás. Attracting large crowds of festival goers, the site grounds swelled to more than 200,000 people. 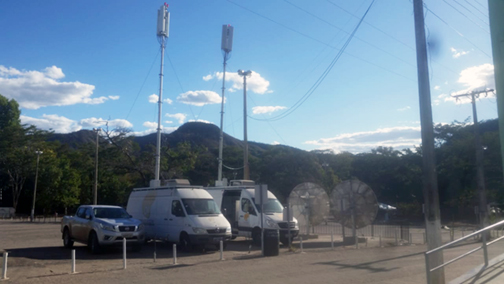 For the first time, the city and the festival sites were served with coverage, by mobile cellular COW — Cellular On Wheels. Phone, data and streaming services, whose 100 percent backbone was provided by a satellite backhauling solution from SpaceBridge using Ku-band via Telesat´s Anik G1 satellite. SpaceBridge implemented state-of-the-art Ku-band VSAT stations that were outfitted with the company's WaveSwitch™ technology, operating dynamically in SCPC, A-SCPC and MF-TDMA modes.

The collaboration between the SpaceBridge satellite technical team, eNodeB terrestrial equipment makers, the mobile operator and the Telesat team during the entire event, allowedfor  the increase of  available bandwidth, adjusting the cellular traffic growth as more people arrived into the city every day.

This flexibility offered the population adequate service, better transmission quality, Internet access for dozens of POS machines, the sending of  photos, videos and texts and voice communications. In events such as this, the so-called outgoing traffic, which goes from the mobile stations to the Internet, can even surpass incoming traffic, as the interest of the population is focused on communications through social networks and messaging applications.

SpaceBridge Optimization Embedded Software allows for space segment savings of up to 35 percent, as well as the use of layer 2 and the ability to prioritize traffic between Control Plane, Management protocol and user traffic with a large amount of packet per second, as some key features of SpaceBridge’s solution allowed the mobile operator to fully meet all requirements at this make-shift city.

Carlos Xavier, of SpaceBridge Brazil, noted that the company's powerful VSAT modems, once again, prove to be the ideal solution for large concentrations of people and for large events, where immediate availability and high quality are crucial factors. In this location, with the presence of over 200,000 people during the event, the In-Bound traffic in each eNodeB/VSAT station exceeded 45 Mbps, the total bandwidth was efficiently shared between four stations that operated the sudden unplanned traffic surge that is equal or exceeds the typical peak traffic of some large cities.