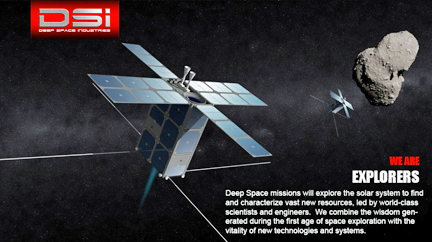 [SatNews] NASA has awarded two contracts to Deep Space Industries Inc. to accelerate the agency’s plans to partner with private industry on asteroid prospecting and harvesting.

One contract will analyze commercial approaches to NASA’s asteroid goals and how an industry-led asteroid economy can make crewed Mars missions safer, sooner, and less expensive.  The second contract will examine several small asteroid-prospecting payloads that can be launched as hitchhikers on NASA missions.

Participating with Deep Space on both successful proposals will be Near Earth LLC, which has been raising capital for satellite and space companies since 2002 (and more than $15 billion since 1993 at prior investment banks).  Near Earth also frequently provides financial and strategic advisory services to major aerospace companies, satellite operators, private equity firms, and hedge funds.

Dr. Mason Peck of Cornell University, a former Chief Technologist for NASA, will collaborate with Deep Space on the small ride-along payloads contract with research into tiny “Sprites” that could be released by the dozens or hundreds during asteroid encounters to gather wide-area data.

“Deep Space brings commercial insight to NASA’s asteroid planning, because our business is based on supplying what commercial customers in Earth orbit need to operate, as well as serving NASA’s needs for its Moon and Mars exploration,” said CEO Daniel Faber. “The fuel, water, and metals that we will harvest and process will be sold into both markets, making available industrial quantities of material for expanding space applications and services.”

“The space industry is transforming with new lower-cost launch options and inexpensive small satellites, trends that Deep Space intends to exploit for its prospecting missions,” said Hoyt Davidson, Managing Member at Near Earth LLC.  “These missions should position Deep Space for the next major growth opportunity in Space -- supplying space enterprises and governments with resources found and processed in space.”

The first study will analyze the economic fundamentals of a commercially oriented Asteroid Initiative, and document the expanded exploration resources that industry could supply to NASA if this course were followed.  NASA would receive greatly improved sampling/surveying technologies for the crew inspecting the captured asteroid at no cost to the agency.  NASA also would gain use of potentially crucial resources harvested from the asteroid without needing to pay for the research and development costs required to unlock them.

Deep Space has several spacecraft types under development for its asteroid mineral surveys, all based on the same core subsystems. In the second study, the company will assess each of these spacecraft for compatibility with NASA’s launch vehicle for its asteroid mission plus the initial launch of NASA’s Space Launch System.  The missions will be designed to further commercial and academic goals through innovations like Cornell’s Sprites.

“Each Sprite is a functional spacecraft weighing less than a penny,” said Dr. Mason Peck.  “Sprites on Deep Space missions will be revolutionary new tools for gathering data across wide areas of interest, both on and around asteroids.”

“A profitable asteroid industry is upon us,” said David Gump, Vice Chair and Director of Marketing for Deep Space.  “During the current prospecting phase, Deep Space revenue sources include providing data to scientists and NASA, and enabling corporate marketers to activate their customers through direct  participation in the asteroid adventure.”

The two system concept studies start next month and will be completed in six months in support the agency’s Asteroid Redirect Mission (ARM).  The full NASA announcement of the contract awards is at http://www.nasa.gov/asteroidinitiative. Additional details regarding AI may be found at this infopage.

More information about Deep Space is at http://deepspaceindustries.com/