...but not if you're a robot. NASA's Robotic Refueling Mission puts that proposition to the test, with a first-of-its-kind demonstration of a simulated fuel transfer in space, no human in sight. But first, there's a pile of prep before the operation can commence.

NASA has demonstrated robotic fluid transfer in space, an objective that will help inform the development of robotic technology to refuel satellites. The first-of-its-kind demonstration was performed during the Robotic Refueling Mission (RRM) aboard the International Space Station. 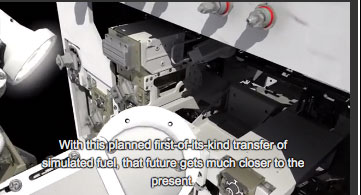 "This achievement is a major step forward in servicing satellites," said Frank Cepollina, associate director of the Satellite Servicing Capabilities Office at NASA's Goddard Space Flight Center in Greenbelt, Maryland. "RRM gives NASA and the emerging commercial satellite servicing industry the confidence to robotically refuel, repair and maintain satellites in both near and distant orbits -- well beyond the reach of where humans can go today."

A joint effort with the Canadian Space Agency, RRM uses the International Space Station as test bed for the research and development of robotic satellite-servicing capabilities. During six days of activity last month, controllers on the ground at NASA's Johnson Space Center in Houston used the space station's remotely operated Dextre, a robotic space handyman, to cut wires, remove and stow caps and perform tasks necessary to refuel satellites not designed to be refueled.

The cutting-edge technologies that RRM is demonstrating could extend the lives of many of the hundreds of satellites currently in geosynchronous Earth orbit. These are satellites that deliver essential services such as weather reports, cell phone communications, television broadcasts, government communications and air traffic management.