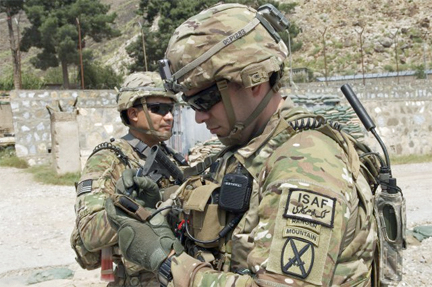 The draft Request for Proposal, which was posted May 21, to the Federal Business Opportunities website at http://www.fbo.gov/ moves the Army toward Full Rate Production for the Rifleman Radio, part of the Handheld, Manpack, Small Form Fit program. Under the full and open competition approach, the Army will award contracts to multiple vendors, creating a "radio marketplace" where vendors will compete for delivery orders as needed, after they achieve technical and operational requirements.

"The full and open competition gives all vendors the opportunity to participate as we work together to build the Army network," said Brig. Gen. Daniel P. Hughes, Program Executive Officer for Command, Control and Communications-Tactical. "The radio marketplace will support continuous innovation to deliver better radios for our Soldiers."

The five-year base, plus a five-year option indefinite delivery, indefinite contract will be awarded to multiple vendors who meet both the technical and service requirements to support the radio. This structure enables the Army to choose from numerous technologies, and release a new contract if radio technology changes significantly after the initial five-year award. The competitive Non-Developmental Item acquisition strategy is expected to reduce radio procurement costs as the Army continues to modernize the network amid fiscal constraints. The acquisition strategy also includes on-ramp opportunities for vendors whose technologies mature after the initial competition and operational tests. A contract award is expected in fiscal year 2015.

The Rifleman Radio is a lightweight, rugged, hand-held radio that transmits voice and data via the Soldier Radio Waveform. With the SRW, the Rifleman Radio acts as its own router and allows information to be transmitted up and down the chain, as well as into the network backbone provided by the Warfighter Information Network-Tactical. The Rifleman Radio can also be linked to Nett Warrior, an Android-based, smartphone-like capability that enables Soldiers to send messages, access mission-related applications and track one another's locations with Global Positioning System technology.

Through Low Rate Initial Production, the Army has already purchased 21,379 Rifleman Radios, which are carried by Soldiers at the platoon, squad and team levels. The radios, fielded as part of the integrated Capability Set 13 network package, are currently supporting dismounted operations in support of the advise-and-assist mission in Afghanistan. Fielding is now underway to additional brigade combat teams, as part of Capability Set 14, with eventual fielding planned across the entire force.

The Army's total acquisition objective for the Rifleman Radio is 193,276 radios.