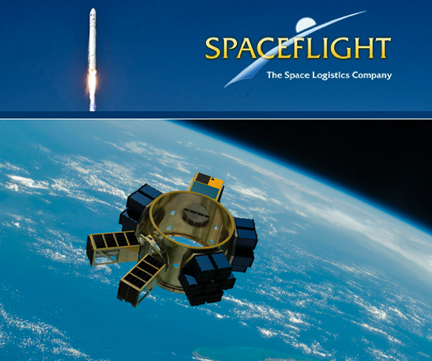 Spaceflight’s inaugural SHERPA mission will deploy up to 1,200 kilograms of customer satellite payloads into LEO during the second half of 2015 on an undisclosed launch vehicle. Spaceflight’s SHERPA is a free-flying platform that ferries up to 1,500kg of rideshare spacecraft and provides a hosted payload solution. The SHERPA has a custom ring as its primary structure and includes a propulsion system and other spacecraft subsystems to deploy payloads in a range of orbits including low Earth, geosynchronous, low lunar and beyond. SHERPA's maiden mission will deliver customer spacecraft to a sun synchronous orbit. Upon customer satellite deployment, SHERPA will test the spacecraft's avionics, attitude determination and control system, as well as communications and other key subsystems to enable future payload delivery and hosted payload missions.

"With SHERPA's first mission manifested, we are growing our capabilities to enable cost-effective access to orbit," said Curt Blake, President of Spaceflight." Starting in 2016 we plan to offer two SHERPA rideshare missions each year, with one mission to Low Earth Orbit and the other to GTO.  We are well along in finalizing these launch opportunities and customer manifest."

Spaceflight has limited capacity remaining on SHERPA for the 2015 LEO mission and the 2016 GTO mission.

For more information on Spaceflight and updates on this launch, please visit http://www.spaceflightservices.com/.