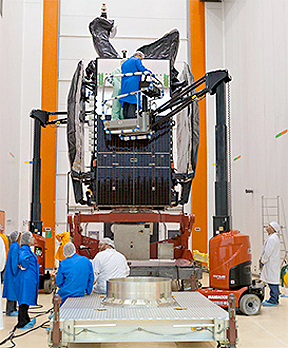 [SatNews] Pre-launch checkout is now underway in French Guiana with...

...Azerspace/Africasat-1a, which is one of two satellite passengers to be orbited on Arianespace’s first flight in 2013 with its workhorse heavy-lift Ariane 5. Azerspace/Africasat-1a was designed and built by Orbital Sciences Corporation based on its STAR-2 platform, under contract to the Republic of Azerbaijan's Ministry of Communications and Information Technologies—which is the sole shareholder in the country's national satellite operator, Azercosmos.

Carrying 36 active C- and Ku-band transponders, the spacecraft is to provide communications services to Azerbaijan, Central Asia, Europe and Africa from an orbital location of 46 deg. East. Azerspace/Africasat-1a will weigh approximately 3,250kg. at liftoff, and has a designed mission life of 15 years.

Joining Azerspace/Africasat-1a on Ariane 5’s upcoming mission will be Amazonas 3, which arrived in French Guiana earlier this month and will be used by Spanish satellite communication operator HISPASAT and its Brazilian subsidiary, HISPAMAR Satellites. Outfitted with Ku-, C- and Ka-band transponders, this Space Systems/Loral-built spacecraft will be positioned at the 61 degrees West orbital slot following its deployment by Ariane 5.

Arianespace’s launch with Azerspace/Africasat-1a and Amazonas 3 is planned for February 7 from the Spaceport in French Guiana. It will follow a medium-lift Soyuz flight conducted on February 4 at Baikonur Cosmodrome by the Euro-Russian Starsem affiliate of Arianespace—orbiting the final batch of six satellites for Globalstar’s second-generation constellation.