SkyWave... To The Rescue (SATCOM)

SkyWave homepage
and
Xtra-Link homepage
[SatNews] A stranded Cape Town yacht and its young crew were successfully located and rescued...

The rescue was accomplished with the aid of Xtra-Link marine tracking service and SkyWave satellite tracking technology. An IRC class Fast 42 yacht, the Spirit of Izivunguvungu, was being delivered back to Cape Town after participating in the Heineken Cape to Rio yacht race when the South African shore team, with GPS information sent by the SkyWave tracking terminal, noticed that the yacht was making no headway and moving in erratic directions 1574 nautical miles from Cape Town in the Atlantic Ocean. Based on this information, the shore crew decided that help was needed and a nearby ship was contacted by the Maritime Rescue Co-ordination Centre (MRCC) to provide assistance. 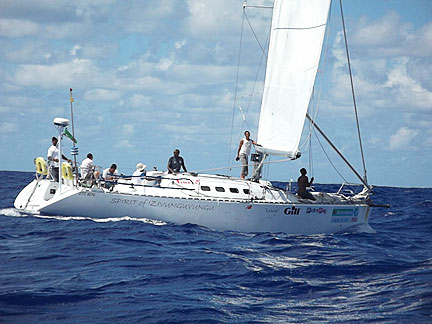 Spirit of Izivunguvungu
The crew of four was successfully saved by a merchant vessel that found the yacht in a state of emergency — the mast was broken, the rudder damaged leaving it with little or no steerage, the engine was not operating, and the boat was slowly sinking caused by a hole from the fallen mast. It has been noted that without the tracking system it would not have been known that the crew and yacht were in distress. Xtra-Link’s ability to track the path of the vessel meant that there was no need to wait until the yacht was heavily overdue before calling an emergency. Also, no time was lost and no costly search mission was required because the exact GPS location of the yacht was received from the SkyWave IsatM2M tracking terminal. Xtra-Link CEO Hans Kuijt believes that it will only be a matter of time before all yachts will begin to carry an Inmarsat satellite tracker, not only for safety but to also to allow shore followers to track their progress. Satellite tracking, already used in a commercial shipping environment is an extremely cost-effective way to save lives and reduce search and rescue costs for the leisure marine market. For the Cape to Rio race, Xtra-Link supplied the Royal Cape Town Yacht club with 20 tracking units, enabling them to fit every yacht participating in the event.