On the 50th Anniversary of the first successful British rocket launch, the Black Arrow name is reinvigorated as Black Arrow Space Technologies starts up in business. 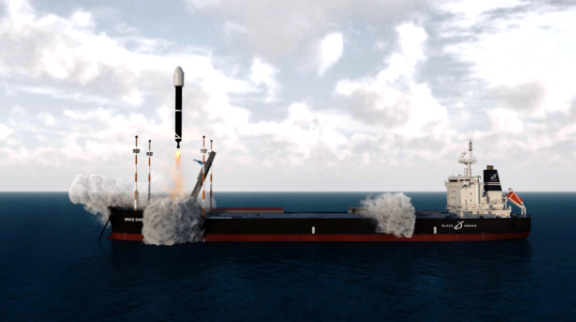 Black Arrow Space Technologies is a new British company developing spaceflight technologies designed to launch satellites into orbit. Black Arrow unique offer is their seaborne launch system – commercial rockets launched from their own space ship. This will enable Britain to offer a global service unavailable elsewhere in the world, bypassing many of the issues faced by land launches.

Initially, the company aims to launch payloads of up to 500 kg. into Polar Low Earth Orbit or 300 kg. into Sun Synchronous Orbit (SSO). This will support a growing niche in the space market, currently under-served by the international ‘access to space’ sector. In time, the concept will be developed to enable much larger payloads to be launched to higher altitudes and more trajectories.

Black Arrow Space Technologies has negotiated an agreement with a major investor to fully fund the company development activities, up to the completion of the test launch phase of the project, which is anticipated to take between two and three years. Design and development work will take place in the Oxfordshire area, with engine test stands and the ship fleet, including the launch vessel and support ships, based in South Wales. It is anticipated that around 300 high-skilled jobs will be created by the time that commercial launches begin.

The first launches are planned to take place from the Atlantic Ocean, South West of Ireland. The initial variant of the rocket will allow Black Arrow to explore and develop specialist technologies, components and procedures for use on subsequent commercial vehicles. Black Arrow will attract innovative technologies from external sources to complement their internal composite parts and help them to deliver the service quickly. The seaborne spaceport will use existing vessels, suitably modified for specialist use, reducing costs further.

CEO Paul Williams said the company is pleased to welcome a major investor to this exciting program, helping the firm to develop products and build a world-class satellite launch service. Black Arrow will involve all regions of the country in the planned developments, encouraging new talent and initiating a new space awareness for all. By adopting the latest technologies, the firm aims to be the cleanest and most cost-effective satellite launch service, from seabed to space and will offer a highly responsive ride to orbit for deployment of Earth Observation (EO) assets as well as a flexible option for telecommunications, navigation and data resources. Black Arrow's mobility of operation will appeal to many friendly countries around the world where such activities hold great attraction.