The German Aerospace Center (DLR) has announced that the TanDEM-X and TerraSAR-X satellite pair have acquired their first image of Earth’s surface, synchronized to the microsecond, while flying over Mount Etna in Italy.

The first bistatic radar image acquired by the twin satellites TanDEM-X and TerraSAR-X shows the Italian volcano Mount Etna, on the east coast of Sicily. On the left of the image, below the flank of the volcano, the city of Catania can be seen as a collection of bright points. This image, acquired while the satellites were orbiting at a distance of only 350 metres from one another, is the world's first to be made using such a close satellite formation. Credit: DLR.

Scientists at the German Aerospace Center (Deutsches Zentrum für Luft- und Raumfahrt; DLR) have used the data to create a three-dimensional digital elevation model with an unprecedented elevation accuracy down to two metres. The image, taken while the satellites were flying just 350 metres apart, is the first in the world to be made by satellites flying in such a close formation. The image shows Mount Etna on the east coast of Sicily. This three-dimensional view of the volcano was generated from data recorded by TanDEM-X and TerraSAR-X. This was acquired using bistatic radar, where one of the satellites transmits a radar signal to Earth and the two satellites receive the reflection of this signal simultaneously. In this way, a highly accurate three-dimensional terrain model is created on a 12-metre grid. A similar recording technique was used in the Shuttle Radar Topography Mission (SRTM) in February of 2000. However, in this case only 60 percent of Earth's surface was imaged, and at a coarser grid spacing of 30 to 90 metres. 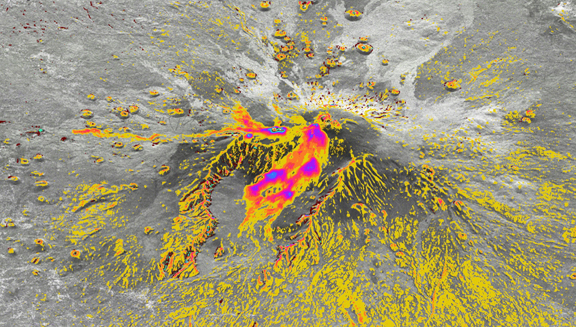 Major differences between the Shuttle Radar Topography Mission (SRTM) elevation model generated in 2000 and the current TanDEM-X elevation model are shown in colour on this TanDEM-X radar image of Mount Etna. The differences are due partly to the finer variations in elevation that SRTM could not reveal and partly due to new lava flows and a change in the altitude of the crater. One such outflow, from 2001, is visible to the south (left), while most of the changes in the central 'Valley of the Ox' (Valle del Bove) are of more recent origin. Credit: DLR.

Comparison of the TanDEM-X elevation model with data acquired ten years previously by SRTM demonstrates the improvement in precision; the difference between the elevations measured today and the SRTM elevation data is represented in colour on a TanDEM-X radar image of the area surrounding Mount Etna. In the area of the actual crater especially and along the flanks of the volcano there are differences of up to 30 metres. 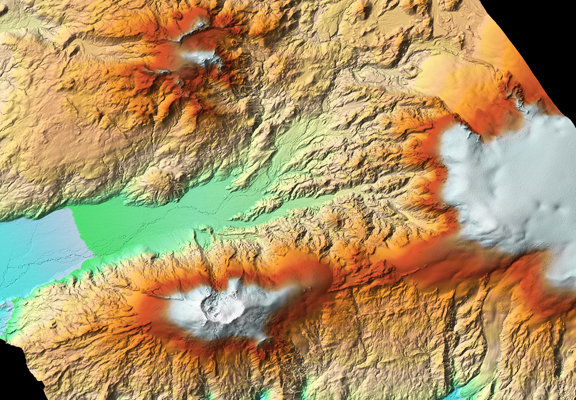 The eruption of Eyjafjallajökull volcano in spring 2010 freed the crater, to the left in the image, of its ice cover. This three-dimensional elevation model, created using data from the two radar satellites TanDEM-X and TerraSAR-X, shows that the nearby volcano Katla (right) is probably still active; the small indentations indicate that the ice sheet covering it is melting and collapsing. Credit: DLR.

The first images taken in close flying formation form the foundation of the mission objective; from 2011 the two satellites will spend three years systematically measuring the entire surface of Earth multiple times with great precision. The radar satellites can observe the 150 million square kilometres of Earth’s surface around the clock, without interruption from the weather and clouds. The data acquired can be used for mapping the landscape, city planning and navigation, as well as for mission planning in disaster areas. It can also be used for scientific research in glacial, earthquake or volcanic regions. The DLR is responsible for the scientific use of the TanDEM-X data, planning and executing the mission, controlling the two satellites and generating the digital elevation model. Astrium built the satellites and contributed to the cost of their development and deployment. As with TerraSAR-X, Infoterra GmbH, a subsidiary of Astrium, is responsible for the commercial marketing of the TanDEM-X data.