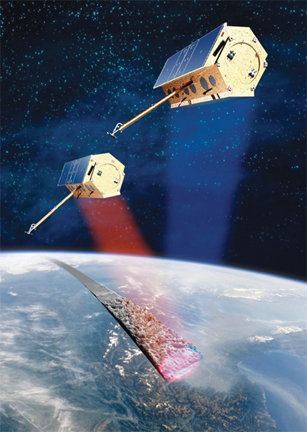 TanDEM-X satellite
[SatNews] The project to “map the Earth in 3D" is now entering its final preparation stage as the German Earth observation satellite TanDEM-X is readied for launch at the Baikonur Cosmodrome in Kazakhstan. On June 21, at approximately 04:14:02 CEST, the satellite is due to be launched into orbit at an altitude of 514 kilometres using a Dnepr launch vehicle.

Having moved into the combined operations phase, the launch service provider Kosmotras has assumed responsibility for the satellite hardware from Europe's leading space company Astrium. TanDEM-X is now being integrated into the space head module.

The TanDEM-X (TerraSAR-X add-on for Digital Elevation Measurement) mission's primary objective is to record all the Earth's landmasses in 3D, or to be more precise, create a global digital elevation model with unprecedented accuracy. The latest-generation Earth observation satellite will considerably extend scientific and commercial applications in this field. Located just a few hundred metres apart, the two German satellites TanDEM-X and the virtually identical TerraSAR-X, which was launched in 2007, will form the first SAR interferometer in space. TanDEM-X is designed for a service life of at least five years and has a planned, overlapping deployment time with TerraSAR-X of at least three years. Over this period, the satellite duo will survey the Earth's entire land surface – 150 million square kilometres – in formation flight. Elevation information with an absolute precision of better than two metres is achieved for a 12 metre grid. The specific advantage of satellite-based remote sensing over an aircraft-based solution is that it provides a global, homogeneous terrain model without any discontinuities at country borders or inconsistencies that might arise from different measurement techniques. The use of radar plays a decisive role in this respect as it can be operated independently of weather and lighting conditions.

The digital terrain model of the Earth will provide Germany with a unique data product in the near future, which can be used in initiatives and programmes such as ZKI (Centre for Satellite Based Crisis Information of the German Aerospace Centre (DLR)), GMES (Global Monitoring for Environment and Security) and GEOSS (Global Earth Observation System of Systems), as well as in security-related co-operation agreements.