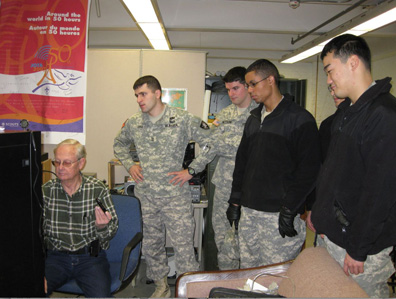 FalconSAT-3 is one of two Air Force Academy satellites currently in orbit, conducting scientific experiments.  This cadet-built and cadet-designed satellite was launched March 8, 2007, and is operated by the Air Force Academy’s ground control station.

Cadets from West Point’s Small Satellite Research Group and Ham Radio Club staffed the ground control station and successfully received the signal.  The amateur radio club, which dates back to 1909, has already demonstrated the capability to monitor to track some satellites in orbit.  That capability went up a notch after Mr. John Clark from the Air Force Academy’s Department of Astronautics oversaw the installation of the FalconSAT-3 electronics suite in West Point’s Bartlett Hall.  For West Point, this puts them a step closer to launching their own small satellite program.  For USAFA, the immediate goal going forward is to initially finish commissioning the West Point ground control station.

“From USAFA, we can get three to four passes per day due to orbital mechanics,” said Jack Anthony, chief of operations of the Air Force Academy’s Small Satellite Research Center and a 1978 Air Force Academy graduate. “But with West Point’s ground station, we can get seven or maybe eight passes a day to communicate with FalconSAT-3.”

FalconSAT-3 is part of the Air Force Academy’s current space fleet.  This research satellite has several scientific experiments in its payload, including:

FalconSAT-3 was joined in orbit by FalconSAT-5 in November.  FalconSAT-5 carries a suite of experiments which will measure the local ionosphere around the orbiting satellite, stimulate the local space weather environment and measure the subsequent changes in that environment, and evaluate the ionosphere’s effects on radio frequency signals to measure communications impact.

Meanwhile, work is underway on the first model of FalconSAT-6. The main experiment aboard FalconSAT-6 is a multi-mode flight experiment designed to prove the effectiveness of multiple thrust modes.  Several other experiments will also be carried, and among these are experiments designed to prove and provide the most fuel-efficient changes in orbit which are available, and to test low energy ion head thrusters, testing the effectiveness of wireless versus wired telemetry, and measuring changes to the local ionospheric environment.

The structural engineering model of FalconSAT-6 will be completed this semester, which will complete the first year of the three years it takes to bring a FalconSAT satellite from drawing board to delivery for launch.  FalconSAT-6 will be delivered to the launch provider in 2013 for a launch in the fall of that year.