A successful launch for Blue Origin has occurred — the company's New Shepard NS-11 mission lifted off from the company's West Texas site carrying a payload of 38 science experiments. 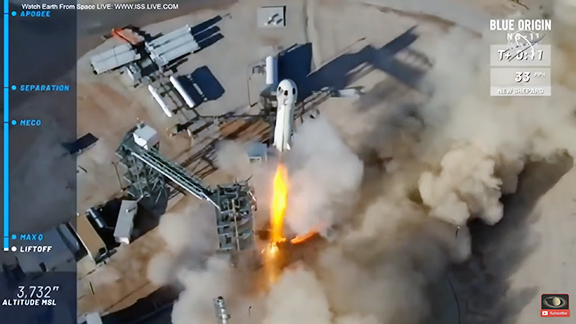 This fifth launch for this rocket occurred at 8:35 a.m., local time (1335 GMT, 9:35 a.m. EDT) and was packed with a variety of research gear. This reusable booster also managed a perfect landing after reaching suborbital space.

Fifteen seconds into the flight, the capsule was separated along with the booster to approximately 346,000 feet, known as the Karman Line. The capsule then returned to Earth via a set of parachutes that were deployed in three main canopies and the expectation is that the booster and the capsule will be used again for a future mission by the company. 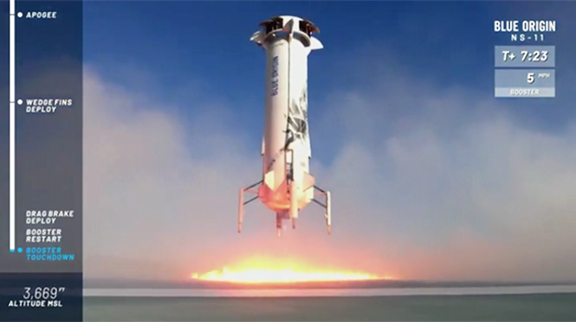 The experiments were sponsored by NASA and the agency's Flight Opportunities program. Blue Origin believes they'll be able to fly passengers to space in a new, six seat New Shepard, perhaps by later this year.

Also on the drawing board for the company is the New Glenn orbital rocket, a New Armstrong booster as well as a craft know as Blue Moon for landing on the moon.

Some of the payloads that were lofted by the rocket include:

Orbital Medicine
Orbital Medicine, a small business focused on aerospace medicine, comes to us through funding from NASA’s Flight Opportunities Program. On NS-11, Marsh Cuttino, MD, will demonstrate an experimental medical technology designed to treat a collapsed lung in zero gravity (which is a gravity-dependent procedure). Thanks to a previous flight on New Shepard, Dr. Cuttino has been able to evolve the technology and this flight will prove a near-final version that could one day save lives in space.

New Century Technology High School
A group of students from Huntsville, Alabama, have designed an experiment to test temperature fluctuations in microgravity. The students were excited to get hands-on experience for a project they’ll be able to launch to space and worked with NASA engineers to perfect their design. By lowering launch costs, more and more students will have the chance to design, build and send technology to space.

MIT Media Lab Space Exploration Initiative
The Space Exploration Initiative is built on the spirit of the MIT Media Lab, uniting artists, engineers, scientists, and designers. As the first MIT flight with New Shepard, the Space Exploration Initiative is flying several scientific payloads, as well as two projects that use zero gravity as a medium for works of art. Telepresent Drawings in Space uses graphite to create a drawing that could only have been made in space. Living Distance: A Spider-Inspired Robotic Dance in Weightlessness demonstrates a crystalline robotic device that navigates zero gravity, similar to a performance. Other payloads include TESSERAE: Self Assembling Space Architecture, Floral Cosmonauts: Crystal Electro-Nucleation and Queen Bee Maiden Flight.